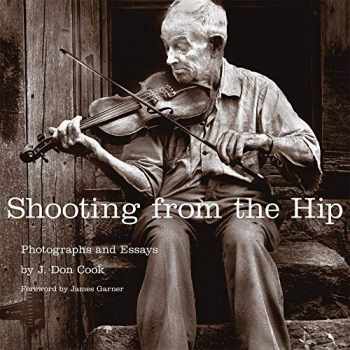 Shooting from the Hip: Photographs and Essays

ISBN-13: 9780806141800
ISBN-10: 0806141808
Author: Cook, J Don
Publication date: 2011
Publisher: University of Oklahoma Press
Format: Hardcover 144 pages
FREE shipping on ALL orders
Not currently buying
Buy New
from $26.87
Marketplace
from $6.49
Show all offers
Add to cart
Marketplace  offers
Seller
Condition
Note
Seller
Once Upon a Time Books
Score: 87%
Condition
Used - Acceptable
This is a used book. It may contain highlighting/underlining and/or the book may show heavier signs of wear . It may also be ex-library or without dustjacket.
Buy for $6.49

In this heartfelt tribute to the spirit and people of Oklahoma, one of the state's most distinguished photojournalists shows that he is equally talented as a photographer and writer. Showcasing black-and-white photographs and fifty short essays, Shooting from the Hip portrays Oklahoma's people, animals, lifestyles, landscapes, and weather in all their diversity. Cowboys, kids, tornados, trucks, rattlesnakes, fiddlers—J. Don Cook has seen them all, and through his poignant essays, he allows us not only to see them but to understand them as he does.

After a hardscrabble boyhood, Cook became a photographer at the age of twenty when he took a job with the Ada Evening News in southern Oklahoma. His first assignment was to photograph six abandoned puppies at the city dump—an apt foreshadowing of his career, for he has always been drawn to the poor, the disenfranchised, and the downtrodden.

In addition to the brief essays that accompany his photographs, Cook shares some of his own life experiences in a moving introduction and epilogue. His unsparing account of some of the worst moments of his difficult youth and his meditations on how he used these hardships to become an artist can only be called inspirational. "At seven I didn't know any better," he writes, "and believed I had few choices. But I quickly learned to cope—to feint, to dodge, to hide, to read, to run, to survive, to make art—and I did it all, shooting from the hip."

J. Don Cook, a resident of Oklahoma City, is an award-winning photojournalist, artist, poet, and business entrepreneur. Nominated three times for a Pulitzer Prize and named News Photographer of the Year seven times by the Oklahoma Press Association, his photographs have appeared in such magazines as National Geographic and Time. James Garner, the acclaimed film and television actor, is best known for his leading roles in the television series Maverick and the The Rockford Files. He is a native of Norman, Oklahoma.