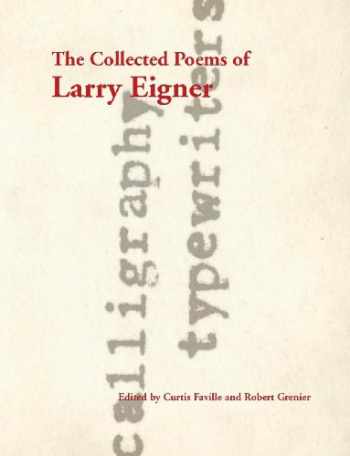 The Collected Poems of Larry Eigner brings together, for the first time, all of the approximately 3,072 published and unpublished poems composed by Larry Eigner (1927-1996), a prominent American poet of the second half of the twentieth century and one of the principal figures of the influential Black Mountain School. Scrupulously edited by Robert Grenier and Curtis Faville from the extensive archives of Eigner typescripts at the University of Kansas and Stanford University, this monumental, four-volume, 8 1/2 by 11 inch edition sets forth in chronological sequence the story of Eigner's achievement, from his modest beginnings as the boy-author of traditional rhymes to his highly original (and often profoundly moving) constructions made of letters in the space of his typewriter page, which have gained him widespread recognition and placed him in the forefront of the literary avant-garde.

For over 40 years, beginning in the early 1950's, Larry Eigner's writing was a wonder and a delight to readers of contemporary poetry, appearing in countless little magazines and in over 75 books and pamphlets. With the publication of The Collected Poems―faithfully reproducing the precise visual and aural relationships envisioned by the author in an equivalently spaced Courier computer font which preserves typewriter spacing―the fact of Eigner's amazing accomplishment can finally be known, appreciated and appraised by a much-better-informed, wider audience.

Palsied from hard birth, growing up in a close-knit, nurturing household in Swampscott, Massachusetts, Eigner courageously overcame a series of physical obstacles and limitations to achieve a mastery over the material text, producing his typescripts on his 1940 Royal manual typewriter using only his right index finger and thumb to create shifting constellations of words in space whose musical and visual designs are realized in a language at once immediate and highly abstract.

Perhaps the best realization to date of the idea of "composition by field" proposed by Charles Olson in his landmark essay "Projective Verse," The Collected Poems of Larry Eigner is a literary event of the first order.