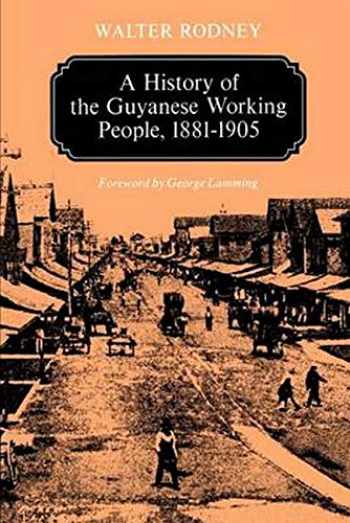 A History of the Guyanese Working People, 1881-1905 (Johns Hopkins Studies in Atlantic History and Culture)

Completed shortly before Walter Rodney's assassination in June 1980, A History of the Guyanese Working People, 1881-1905 provides an original, well-informed, and perceptive contribution to the historiography of nineteenth-century Guyanese society. This comprehensive examination encompasses the history of African and Asian immigration into Guyana, the interaction of ethnic groups, the impact of British colonialism, economic and political constraints on the working class, and the social life of the masses.

Rodney argues that the social evolution of the Guyanese working people has been guided by specific material constraints and extremely powerful external focuses from Europe, Africa, Asia, and North America. He emphasizes the destructive fragmentation of the working class along ethnic, political, and social lines, encouraged by the legacy of slavery, postslavery immigration, legal distinctions between various classes of labor, and the economic bases of the society. in contrast to the well-defined middle and upper classes, the working people appeared divided, disorganized, and leaderless. Rodney's account ends in 1905, when the hardships and frustrations of the masses exploded into violence.

A History of the Guyanese Working People, 1881-1905 will stand alone as a landmark study of the profound social upheaval that characterized Guyanese society in the years following emancipation. Anyone interested in the problems of underdeveloped nations, labor control, and the after-effects of colonialism and imperialism will appreciate the significance of this work.