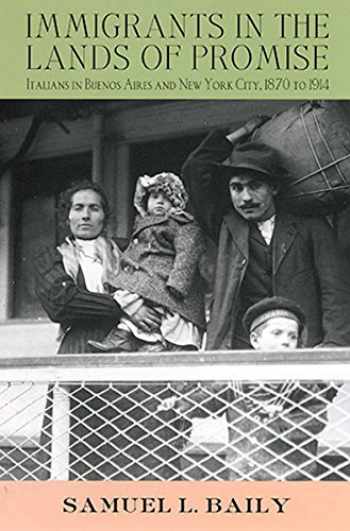 Immigrants in the Lands of Promise: Italians in Buenos Aires and New York City, 1870–1914 (Cornell Studies in Comparative History)

Most studies of immigration to the New World have focused on the United States. Samuel L. Baily's eagerly awaited book broadens that perspective through a comparative analysis of Italian immigrants to Buenos Aires and New York City before World War I. It is one of the few works to trace Italians from their villages of origin to different destinations abroad.

Baily examines the adjustment of Italians in the two cities, comparing such factors as employment opportunities, skill levels, pace of migration, degree of prejudice, and development of the Italian community. Of the two destinations, Buenos Aires offered Italians more extensive opportunities, and those who elected to move there tended to have the appropriate education or training to succeed. These immigrants, who adjusted more rapidly than their North American counterparts, adopted a long-term strategy of investing savings in their New World home. In New York, in contrast, the immigrants found fewer skilled and white-collar jobs, more competition from previous immigrant groups, greater discrimination, and a less supportive Italian enclave. As a result, rather than put down roots, many sought to earn money as rapidly as possible and send their earnings back to family in Italy.

Baily views the migration process as a global phenomenon. Building on his richly documented case studies, the author briefly examines Italian communities in San Francisco, Toronto, and Sao Paulo. He establishes a continuum of immigrant adjustment in urban settings, creating a landmark study in both immigration and comparative history.