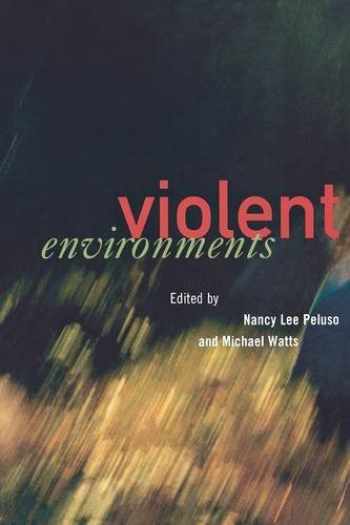 Acknowledged author wrote Violent Environments comprising 464 pages back in 2001. Textbook and eTextbook are published under ISBN 0801487110 and 9780801487118. Since then Violent Environments textbook was available to sell back to BooksRun online for the top buyback price or rent at the marketplace.
Show more

The conventional understanding of environmental security, and its assumptions about the relation between violence and the environment, are challenged and refuted in Violent Environments. Chapters by geographers, historians, anthropologists, and sociologists include accounts of ethnic war in Indonesia, petro-violence in Nigeria and Ecuador, wildlife conservation in Tanzania, and "friendly fire" at Russia's nuclear weapons sites.

Violent Environments portrays violence as a site-specific phenomenon rooted in local histories and societies, yet connected to larger processes of material transformation and power relations. The authors argue that specific resource environments, including tropical forests and oil reserves, and environmental processes (such as deforestation, conservation, or resource abundance) are constituted by and in part constitute the political economy of access to and control over resources. Violent Environments demands new approaches to an international set of complex problems, powerfully arguing for deeper, more ethnographically informed analyses of the circumstances and processes that cause violence.