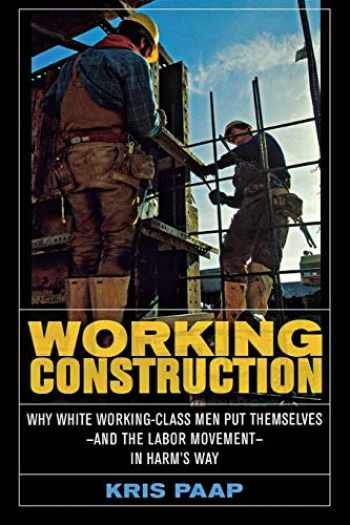 Kris Paap worked for nearly three years as a carpenter's apprentice on a variety of jobsites, closely observing her colleagues' habits, expressions, and attitudes. As a woman in an overwhelmingly male―and stereotypically "macho"―profession, Paap uses her experiences to reveal the ways that gender, class, and race interact in the construction industry. She shows how the stereotypes of construction workers and their overt displays of sexism, racism, physical strength, and homophobia are not "just how they are," but rather culturally and structurally mandated enactments of what it means to be a man―and a worker―in America.

The significance of these worker performances is particularly clear in relation to occupational safety: when the pressures for demonstrating physical masculinity are combined with a lack of protection from firing, workers are forced to ignore safety procedures in order to prove―whether male or female―that they are "man enough" to do the job. Thus these mandated performances have real, and sometimes deadly, consequences for individuals, the entire working class, and the strength of the union movement.

Paap concludes that machismo separates the white male construction workers from their natural political allies, increases their risks on the job, plays to management's interests, lowers their overall social status, and undercuts the effectiveness of their union.