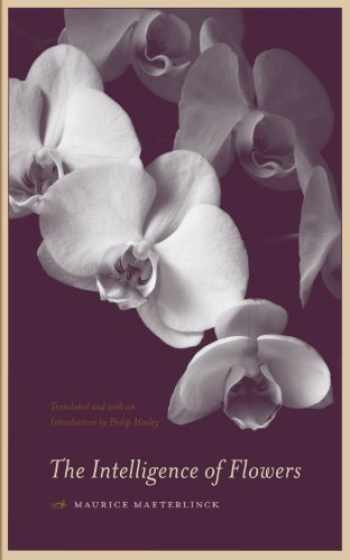 The Intelligence of Flowers

A new translation of one of Maeterlinck’s four great nature essays.

“The republication of Maurice Maeterlinck’s ‘The Intelligence of Flowers,’ regrettably forgotten in our time, is long overdue. The introduction by Mosley is itself a gem, and contains one of the best overviews in print of writings about intelligence in Nature.” — Stephen Harrod Buhner, author of The Secret Teachings of Plants: The Intelligence of the Heart in the Direct Perception of Nature

The second of Maeterlinck’s four celebrated nature essays—along with those on the life of the bee, ant, and termite—“The Intelligence of Flowers” (1907) represents his impassioned attempt to popularize scientific knowledge for an international audience. Writing with characteristic eloquence, Maeterlinck asserts that flowers possess the power of thought without knowledge, a capacity that constitutes a form of intelligence. Appearing one hundred years after the first publication, Philip Mosley’s new translation of the original French essay, and the related essay “Scents,” maintains the verve of Maeterlinck’s prose and renders it accessible to the present-day reader. This is a book for those who are excited by creative encounters between literature and science as well as current debates on the relationship of humankind to the natural world.

It would be superfluous to redraw the picture of the great systems of floral fertilization: the play of stamens and pistil, the seductiveness of scents, the appeal of harmonious and striking colors, the development of nectar, totally useless to the flower, and which it manufactures only to attract and hold the foreign liberator, the messenger of love, bee, bumblebee, fly, butterfly, moth, which must bring it the kiss of the distant, invisible, motionless lover…

We could truly say that ideas come to flowers in the same way they come to us. Flowers grope in the same darkness, encounter the same obstacles and the same ill will, in the same unknown. They know the same laws, same disappointments, same slow and difficult triumphs. It seems they have our patience, our perseverance, our self-love; the same finely tuned and diversified intelligence, almost the same hopes and the same ideals. Like ourselves, they struggle against a vast indifferent force that ends by helping them. — from “The Intelligence of Flowers”

“…a wonderfully enjoyable, insightful and worthwhile read … This work would be of interest to anyone excited by the remarkable process of the plant world and would expressly appeal to gardeners and flower growers.” — Huntia

“A rare gem, written … in lyrical and accessible prose.” — The Times Literary Supplement

“…Maeterlinck is a seductive essayist … [and] writes with the same intrinsic humility that will be familiar to admirers of John Muir, Aldo Leopold, or Mary Oliver.” — The Boston Globe

“That the intelligence of flowers provides Maeterlinck with a theory riddled with contradictions—mostly as a result of his metaphoric reasoning—seems less important than the fundamental truths of the metaphors unto themselves. As a result, ‘The Intelligence of Flowers’ is happily welcome once more, in this centenary reissue.” — San Francisco Chronicle

The Belgian author Maurice Maeterlinck (1862–1949) is remembered best as a pioneer of Symbolist drama in the 1890s. Recipient of the Nobel Prize for Literature in 1911, Maeterlinck was also a prolific and accomplished essayist.
Show more