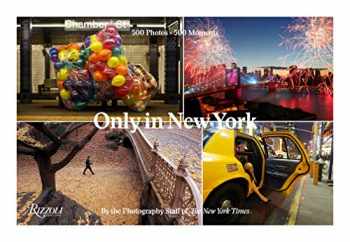 Only in New York (UNIVERSE)

Acknowledged author The Photography Staff of the NY Times wrote Only in New York (UNIVERSE) comprising 512 pages back in 2019. Textbook and eTextbook are published under ISBN 0789336553 and 9780789336552. Since then Only in New York (UNIVERSE) textbook was available to sell back to BooksRun online for the top buyback price of $ 1.00 or rent at the marketplace.
Show more

Curated from hundreds of thousands of photos from The New York Times' archives Only in New York brings together the most memorable, poignant, and historic images of the Big Apple. This beautiful gift book celebrates New York in a way that will be treasured by native New Yorkers and tourists alike.

The New York Times is the world's foremost news organization, but it is very much a hometown paper, too. Since the inception of the camera, Times photographers have captured every newsworthy event--and many of the most iconic and intimate moments--that together document the very spirit and essence of New York City.

These 500 photos are selected and paired in clever, humorous, and poignant diptychs that bring the city to life as you could only see in NYC--from Broadway to Yankee Stadium, nightlife to street life, skyscrapers to subways. And since the turn of the last century, NY Times photographers have been visually recording the vast, and vastly interesting and entertaining, mix of people, places, and institutions that provide New York with its reputation as the city that occasionally dozes but never closes. This collection of their work spans more than a century, providing a vivid chronicle of metropolitan life at its most vibrant. Most of all, of course, there are the people and the neighborhoods they inhabit. Through the work of such celebrated New York Times photographers as Damon Winter, Neal Boenzi, Fred R. Conrad, Ruth Fremson, Vincent Laforet, Michelle Agins, Todd Heisler, Chang W. Lee, Barton Silverman, Sara Krulwich, Michelle Agins, Tyler Hicks, and many more, the spirit of the city is captured in this extraordinary book. Their ability to capture the familiar in original ways, and the seldom-seen in surprising ones, gives this book the look and feel of a true original.
Only in New York is a celebration of New York City and its people--and is sure to be treasured by native New Yorkers, tourists, and anyone who aspires to "make it there."
Show more