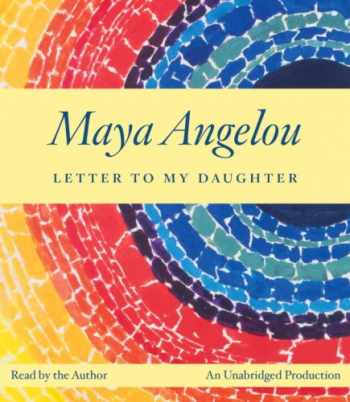 Letter to My Daughter

Acknowledged authors Angelou, Maya wrote Letter to My Daughter comprising 2 pages back in 2008. Textbook and eTextbook are published under ISBN 0739370383 and 9780739370384. Since then Letter to My Daughter textbook was available to sell back to BooksRun online for the top buyback price or rent at the marketplace.
Show more

For a world of devoted fans, a much-awaited new volume of absorbing stories and inspirational wisdom from one of our best-loved writers.

Dedicated to the daughter she never had but sees all around her, Letter to My Daughter reveals Maya Angelou’s path to living well and living a life with meaning. Told in her own inimitable style, this book transcends genres and categories: guidebook, memoir, poetry, and pure delight.

Here in short spellbinding essays are glimpses of the tumultuous life that led Angelou to an exalted place in American letters and taught her lessons in compassion and fortitude: how she was brought up by her indomitable grandmother in segregated Arkansas, taken in at thirteen by her more worldly and less religious mother, and grew to be an awkward, six-foot-tall teenager whose first experience of loveless sex paradoxically left her with her greatest gift, a son.

Whether she is recalling such lost friends as Coretta Scott King and Ossie Davis, extolling honesty, decrying vulgarity, explaining why becoming a Christian is a “lifelong endeavor,” or simply singing the praises of a meal of red rice–Maya Angelou writes from the heart to millions of women she considers her extended family.

Like the rest of her remarkable work, Letter to My Daughter entertains and teaches; it is a book to cherish, savor, and share.


“I gave birth to one child, a son, but I have thousands of daughters. You are Black and White, Jewish and Muslim, Asian, Spanish speaking, Native Americans and Aleut. You are fat and thin and pretty and plain, gay and straight, educated and unlettered, and I am speaking to you all. Here is my offering to you.”

–from Letter to My Daughter


Grateful acknowledgment is made to the following for permission to reprint previously published material: