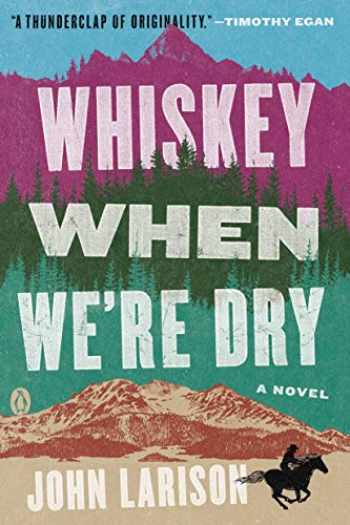 Whiskey When We're Dry: A Novel

Acknowledged authors Larison, John wrote Whiskey When We're Dry: A Novel comprising 416 pages back in 2019. Textbook and eTextbook are published under ISBN 073522045X and 9780735220454. Since then Whiskey When We're Dry: A Novel textbook was available to sell back to BooksRun online for the top buyback price of $ 0.04 or rent at the marketplace.
Show more

"A thunderclap of originality, here is a fresh voice and fresh take on one of the oldest stories we tell about ourselves as Americans and Westerners. It's riveting in all the right ways -- a damn good read that stayed with me long after closing the covers." - Timothy Egan, New York Times bestselling author of The Worst Hard Time

From a blazing new voice in fiction, a gritty and lyrical American epic about a young woman who disguises herself as a boy and heads west

In the spring of 1885, seventeen-year-old Jessilyn Harney finds herself orphaned and alone on her family's homestead. Desperate to fend off starvation and predatory neighbors, she cuts off her hair, binds her chest, saddles her beloved mare, and sets off across the mountains to find her outlaw brother Noah and bring him home. A talented sharpshooter herself, Jess's quest lands her in the employ of the territory's violent, capricious Governor, whose militia is also hunting Noah--dead or alive.

Wrestling with her brother's outlaw identity, and haunted by questions about her own, Jess must outmaneuver those who underestimate her, ultimately rising to become a hero in her own right.

Told in Jess's wholly original and unforgettable voice, Whiskey When We're Dry is a stunning achievement, an epic as expansive as America itself--and a reckoning with the myths that are entwined with our history.
Show more