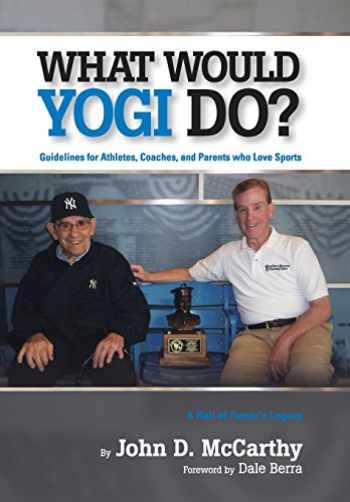 What Would Yogi Do?: Guidelines for Athletes, Coaches, and Parents Who Love Sports

Numerous books have been written about Yogi's life and exploits on the field. The purpose of this book is not to recount Yogi's playing career. Rather the goal is to provide specific guidelines for athletes, coaches, and parents, which emanate from Yogi's core beliefs - beliefs that grew out of a time when we weren't reading about showboating, pampered athletes, abusive, unethical coaches, and overzealous, over-indulgent parents - so that the benefits of amateur sports can be maximized. We can't change today's culture, its pace too fast, its reach too global. However, we can and must change the culture of sports, at least on the amateur level. To do so will require cooperation among athletes, coaches, and parents. This book, divided into three sections, is filled with specific suggestions for each part of the sports triumvirate to get us back on track. It is not meant to be read selectively by section, but rather in total, so that everyone has the same information. For too long athletes, coaches, and parents have been spoken to, or targeted in writing, as separate entities. My goal is to get them on the same page, literally. By pointing out common threads running through their respective experiences, my hope is that everyone will have a better understanding of the necessary alliances that need to be formed. It strikes me that relationships among the three parties have become increasingly adversarial, so much so that many coaches, good ones, are walking away from the profession they once cherished because they don't feel it's worth the hassle. Playing time, once regarded as something to be earned, has come to be regarded as an entitlement, and the battle lines have been drawn. We've lost the sense that we're all in this together. The outcome has become much more important than the process. External forces-the skyrocketing cost of a college education, the saturation of sports on TV, sports talk radio and internet blogs, and social media - have eroded the once highly respected relationship between an athlete, his/her coach, and his/her parents. That distresses Yogi, and it distresses me as well. That's why I wrote this book.