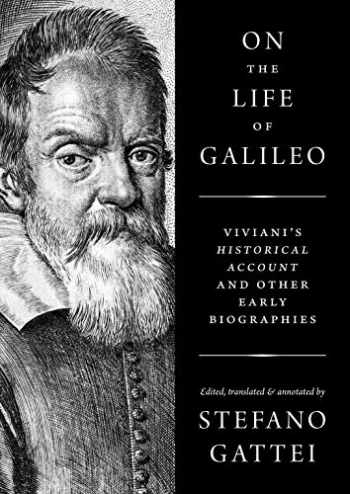 On the Life of Galileo: Viviani's Historical Account and Other Early Biographies

This unique critical edition presents key early biographical accounts of the life and work of Galileo Galilei (1564–1642), written by his close contemporaries. Collected and translated into English for the first time and supplemented by an introduction and incisive annotations by Stefano Gattei, these documents paint an incomparable firsthand picture of Galileo and offer rare insights into the construction of his public image and the complex intertwining of science, religion, and politics in seventeenth-century Italy.

Here in its entirety is Vincenzo Viviani’s Historical Account, an extensive and influential biography of Galileo written in 1654 by his last and most devoted pupil. Viviani’s text is accompanied by his “Letter to Prince Leopoldo de’ Medici on the Application of Pendulum to Clocks” (1659), his 1674 description of Galileo’s later works, and the long inscriptions on the façade of Viviani’s Florentine palace (1702). The collection also includes the “Adulatio perniciosa,” a Latin poem written in 1620 by Cardinal Maffeo Barberini―who, as Pope Urban VIII, would become Galileo’s prosecutor―as well as descriptive accounts that emerged from the Roman court and contemporary European biographers.

Featuring the original texts in Italian, Latin, and French with their English translations on facing pages, this invaluable book shows how Galileo’s pupils, friends, and critics shaped the Galileo myth for centuries to come, and brings together in one volume the primary sources needed to understand the legendary scientist in his time.