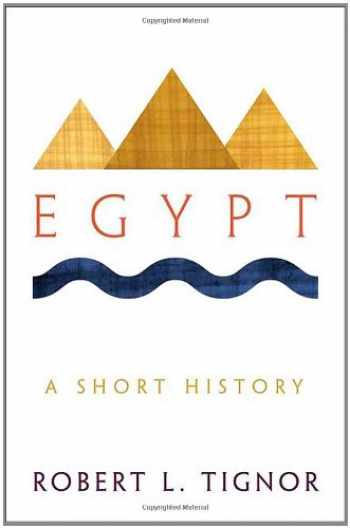 Acknowledged authors Tignor, Robert L. wrote Egypt: A Short History comprising 392 pages back in 2011. Textbook and eTextbook are published under ISBN 0691153078 and 9780691153070. Since then Egypt: A Short History textbook was available to sell back to BooksRun online for the top buyback price or rent at the marketplace.
Show more

This is a sweeping, colorful, and concise narrative history of Egypt from the beginning of human settlement in the Nile River valley 5000 years ago to the present day. Accessible, authoritative, and richly illustrated, this is an ideal introduction and guide to Egypt's long, brilliant, and complex history for general readers, tourists, and anyone else who wants a better understanding of this vibrant and fascinating country, one that has played a central role in world history for millennia--and that continues to do so today.

Respected historian Robert Tignor, who has lived in Egypt at different times over the course of five decades, covers all the major eras of the country's ancient, modern, and recent history. A cradle of civilization, ancient Egypt developed a unique and influential culture that featured a centralized monarchy, sophisticated art and technology, and monumental architecture in the form of pyramids and temples. But the great age of the pharaohs is just the beginning of the story and Egypt: A Short History also gives a rich account of the tumultuous history that followed--from Greek and Roman conquests, the rise of Christianity, Arab-Muslim triumph, and Egypt's incorporation into powerful Islamic empires to Napoleon's 1798 invasion, the country's absorption into the British Empire, and modern, postcolonial Egypt under Nasser, Sadat, and Mubarak.

This book provides an indispensable key to Egypt in all its layers--ancient and modern, Greek and Roman, and Christian and Islamic. In a new afterword the author analyzes the recent unrest in Egypt and weighs in on what the country might look like after Mubarak.