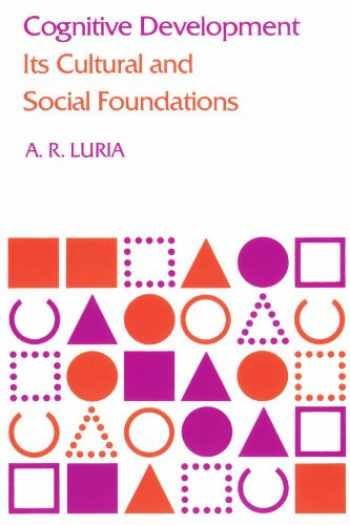 Alexander Romanovich Luria, one of the most influential psychologists of the twentieth century, is best known for his pioneering work on the development of language and thought, mental retardation, and the cortical organization of higher mental processes. Virtually unnoticed has been his major contribution to the understanding of cultural differences in thinking.

In the early 1930s young Luria set out with a group of Russian psychologists for the steppes of central Asia. Their mission: to study the impact of the socialist revolution on an ancient Islamic cotton-growing culture and, no less, to establish guidelines for a viable Marxist psychology. Lev Vygotsky, Luria's great teacher and friend, was convinced that variations in the mental development of children must be understood as a process including historically determined cultural factors. Guided by this conviction, Luria and his colleagues studied perception, abstraction, reasoning, and imagination among several remote groups of Uzbeks and Kirghiz―from cloistered illiterate women to slightly educated new friends of the central government.

The original hypothesis was abundantly supported by the data: the very structure of the human cognitive process differs according to the ways in which social groups live out their various realities. People whose lives are dominated by concrete, practical activities have a different method of thinking from people whose lives require abstract, verbal, and theoretical approaches to reality.

For Luria the legitimacy of treating human consciousness as a product of social history legitimized the Marxian dialectic of social development. For psychology in general, the research in Uzbekistan, its rich collection of data and the penetrating observations Luria drew from it, have cast new light on the workings of cognitive activity. The parallels between individual and social development are still being explored by researchers today. Beyond its historical and theoretical significance, this book represents a revolution in method. Much as Piaget introduced the clinical method into the study of children's mental activities, Luria pioneered his own version of the clinical technique for use in cross-cultural work. Had this text been available, the recent history of cognitive psychology and of anthropological study might well have been very different. As it is, we are only now catching up with Luria's procedures.