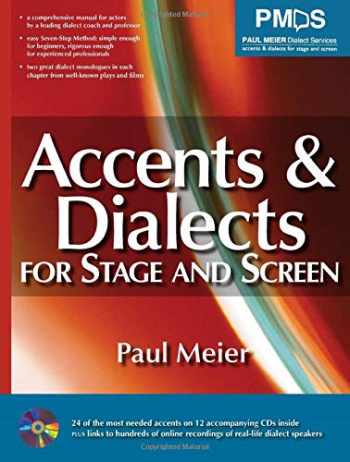 Accents and Dialects for Stage and Screen (with 12 CDs)

This easy-to-follow yet incredibly detailed 370-page book is the industry standard on accents and dialects of the English language. This is the updated, improved and perfect-bound 2012 edition, with photos. You get not only a proven system of instruction instead of mere voice mimicry, but an invaluable collection of 12 CDs. Paul Meier is a leading dialect coach for theatre and film, and contained in this impressive publication is his entire standard repertoire of the 24 most valuable accents and dialects for actors: Afrikaans (South Africa), American Deep South (Mississippi/Georgia/Alabama), American Southern (Kentucky/Tennessee), Australian, Cockney, Downeast New England, French, General American, German, Hampshire, Indian, Irish, Italian, Liverpool, New York, Northern Ireland, Russian, Scottish, South Boston, Spanish (Castilian & Colonial), Standard British English (Received Pronunciation), Welsh, Yiddish, and Yorkshire. Coaching many famous actors (Tobey Maguire, Tom Wilkinson, Mark Ruffalo, etc.), Meier has also taught dialects at RADA, LAMDA, Webber-Douglas, the North Carolina School of the Arts, and other famous institutions. In addition to his user-friendly practice material, for each dialect Paul coaches you in two monologues (one male and one female) from a well-known play or film, and links you to the hundreds of online recordings of native speakers on his International Dialects of English Archive (IDEA). Further enhancing the value of the book are his interactive IPA phonetics charts, in addition to information on his unique show-specific dialect CDs for hundreds of plays and musicals, custom CD recording, and phone-coaching services. Easy enough for the beginner, rigorous enough for the experienced professional.