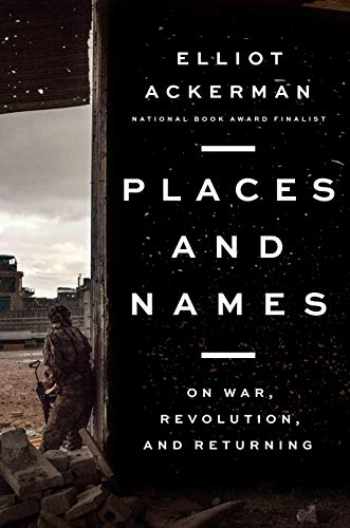 Places and Names: On War, Revolution, and Returning

From a decorated Marine war veteran and National Book Award finalist, an astonishing reckoning with the nature of combat and the human cost of the wars in Iraq, Afghanistan, and Syria.

Toward the beginning of Places and Names, Elliot Ackerman sits in a refugee camp in southern Turkey, across the table from a man named Abu Hassar, who fought for al-Qaeda in Iraq and whose connections to the Islamic State are murky. At first, Ackerman pretends to have been a journalist during the Iraq War, but after establishing a rapport with Abu Hassar, he takes a risk by revealing to him that in fact he was a Marine special operation officer. Ackerman then draws the shape of the Euphrates River on a large piece of paper, and his one-time adversary quickly joins him in the game of filling in the map with the names and dates of places where they saw fighting during the war. They had shadowed each other for some time, it turned out, a realization that brought them to a strange kind of intimacy.

The rest of Elliot Ackerman's extraordinary memoir is in a way an answer to the question of why he came to that refugee camp, and what he hoped to find there. By moving back and forth between his recent experiences on the ground as a journalist in Syria and its environs and his deeper past in Iraq and Afghanistan, he creates a work of remarkable atmospheric pressurization. Ackerman shares vivid and powerful stories of his own experiences in combat, culminating in the events of the Second Battle of Fallujah, the most intense urban combat for the Marines since Hue in Vietnam, where Ackerman's actions leading a rifle platoon saw him awarded the Silver Star. He weaves these stories into the latticework of a masterful larger reckoning with contemporary geopolitics through his vantage as a journalist in Istanbul and with the human extremes of both bravery and horror.

At once an intensely personal story about the terrible lure of combat and a brilliant meditation on the larger meaning of the past two decades of strife for America, the region, and the world, Places and Names bids fair to take its place among our greatest books about modern war.
Show more