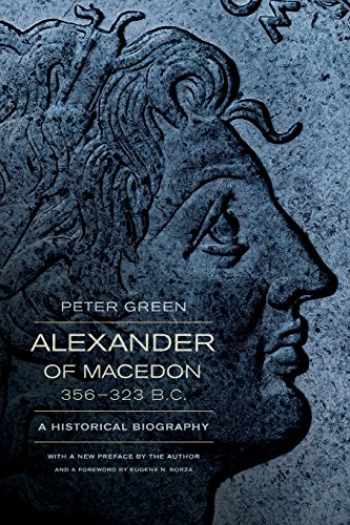 Until recently, popular biographers and most scholars viewed Alexander the Great as a genius with a plan, a romantic figure pursuing his vision of a united world. His dream was at times characterized as a benevolent interest in the brotherhood of man, sometimes as a brute interest in the exercise of power. Green, a Cambridge-trained classicist who is also a novelist, portrays Alexander as both a complex personality and a single-minded general, a man capable of such diverse expediencies as patricide or the massacre of civilians. Green describes his Alexander as "not only the most brilliant (and ambitious) field commander in history, but also supremely indifferent to all those administrative excellences and idealistic yearnings foisted upon him by later generations, especially those who found the conqueror, tout court, a little hard upon their liberal sensibilities."

This biography begins not with one of the universally known incidents of Alexander's life, but with an account of his father, Philip of Macedonia, whose many-territoried empire was the first on the continent of Europe to have an effectively centralized government and military. What Philip and Macedonia had to offer, Alexander made his own, but Philip and Macedonia also made Alexander form an important context for understanding Alexander himself. Yet his origins and training do not fully explain the man. After he was named hegemon of the Hellenic League, many philosophers came to congratulate Alexander, but one was conspicuous by his absence: Diogenes the Cynic, an ascetic who lived in a clay tub. Piqued and curious, Alexander himself visited the philosopher, who, when asked if there was anything Alexander could do for him, made the famous reply, "Don't stand between me and the sun." Alexander's courtiers jeered, but Alexander silenced them: "If I were not Alexander, I would be Diogenes." This remark was as unexpected in Alexander as it would be in a modern leader.

For the general reader, the book, redolent with gritty details and fully aware of Alexander's darker side, offers a gripping tale of Alexander's career. Full backnotes, fourteen maps, and chronological and genealogical tables serve readers with more specialized interests.