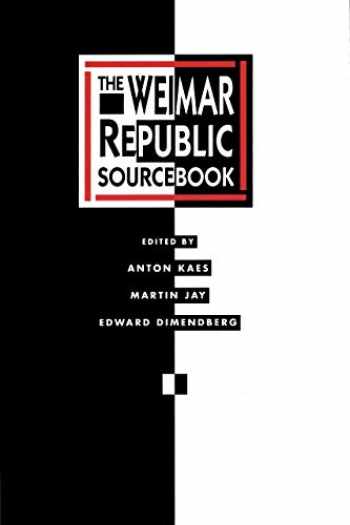 Acknowledged authors Kaes, Anton, Jay, Martin, Dimendberg, Edward wrote The Weimar Republic Sourcebook (Volume 3) comprising 830 pages back in 1995. Textbook and eTextbook are published under ISBN 0520067754 and 9780520067752. Since then The Weimar Republic Sourcebook (Volume 3) textbook was available to sell back to BooksRun online for the top buyback price or rent at the marketplace.
Show more

A laboratory for competing visions of modernity, the Weimar Republic (1918-1933) continues to haunt the imagination of the twentieth century. Its political and cultural lessons retain uncanny relevance for all who seek to understand the tensions and possibilities of our age. The Weimar Republic Sourcebook represents the most comprehensive documentation of Weimar culture, history, and politics assembled in any language. It invites a wide community of readers to discover the richness and complexity of the turbulent years in Germany before Hitler's rise to power.

Drawing from such primary sources as magazines, newspapers, manifestoes, and official documents (many unknown even to specialists and most never before available in English), this book challenges the traditional boundaries between politics, culture, and social life. Its thirty chapters explore Germany's complex relationship to democracy, ideologies of "reactionary modernism," the rise of the "New Woman," Bauhaus architecture, the impact of mass media, the literary life, the tradition of cabaret and urban entertainment, and the situation of Jews, intellectuals, and workers before and during the emergence of fascism.

While devoting much attention to the Republic's varied artistic and intellectual achievements (the Frankfurt School, political theater, twelve-tone music, cultural criticism, photomontage, and urban planning), the book is unique for its inclusion of many lesser-known materials on popular culture, consumerism, body culture, drugs, criminality, and sexuality; it also contains a timetable of major political events, an extensive bibliography, and capsule biographies. This will be a major resource and reference work for students and scholars in history; art; architecture; literature; social and political thought; and cultural, film, German, and women's studies.