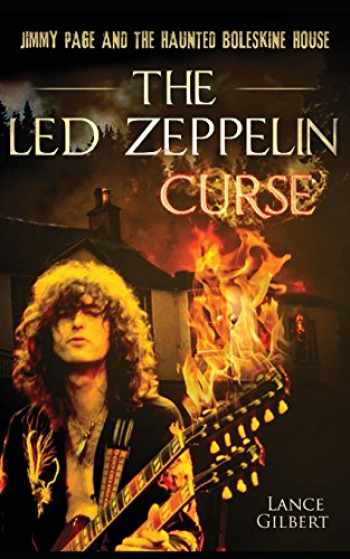 This book often had me thinking, Really? No way!" "Not your normal rock bio; it's awesome!" "This book has completely made me reassess Led Zeppelin, Jimmy Page, the curse and Aleister Crowley." "Did dark forces play a part in the bands success? I'm saying nothing!"

"A refreshingly different spin on two of my favorite subjects- rock music & the supernatural." "Very thoroughly researched giving many facts and details." "The book is well written and as stated above the author certainly knows his stuff about the band and the Magick element."

"If you have any interest in the band or the occult - this is a must read!" "A necessity for the magical, the mysterious, the musical, and the seriously creepy section of your bookshelf." "Wow! What can I say? Just pick it up & read it! I promise you will not be able to put it down."

"Probably the most in-depth book that will ever be written on the Led Zeppelin occult/curse subject." "I've always wondered about the claims of Jimmy and the magic. This book explains a lot of things."

"Loved it! A great read for anyone curious about Jimmy Page's fascination with Aleister Crowley and the history of Boleskin House." "The Led Zeppelin Curse has everything that I would want in a read: rock n roll, magic(k) and new information about rock gods that I didn't already know."

Are you a guitar music fan or do you like different rock music styles? Do occult magic spells, witchcraft spells or occult demons fascinate you? Is occult supernatural nonfiction something you're interested in or are you curious about magick studies; including sex magick? Are you a fan of Jimmy Page, Robert Plant or John Bonham? If you've answered yes to any of the above questions, then this is the book for you.

There has long been rumour that three of the four members of Led Zeppelin (Jimmy Page, Robert Plant and John Bonham) cast witchcraft spells utilizing occult demons to sell their souls for fame and fortune. The legend of the Led Zeppelin Curse emerged in the late 1970's after multiple accidents, deaths and other bad luck began to plague Jimmy Page, Robert Plant and John Bonham.

Led Zeppelin founder Jimmy Page was known for his intense interest in the occult magic spells and sex magick rituals found in the magick studies books of notorious occult demons magician, Aleister Crowley. It's been said that Page practiced Aleister Crowley's sex magick techniques with groupies while on tour. Evidence of Page's interest in magick studies can blatantly be found in the album, Led Zeppelin iv. Known as the most overtly occult of their albums, Led Zeppelin iv contains symbolism which could be related to occult demons. Instead of an album name, Led Zeppelin iv contains four symbols, each representing band members Page, Robert Plant, John Bonham and John Paul Jones.

So, what is the culprit of rock music's most notorious curse of all? This occult supernatural nonfiction book ties together all the details of this enduring mystery (including an analysis of Led Zeppelin iv) involving one of the most popular rock music styles which gave birth to guitar music's very own heavy metal!