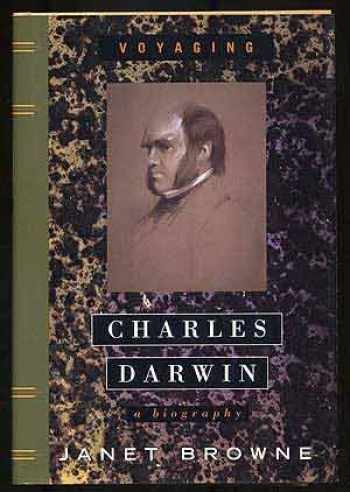 Acknowledged authors Browne, Janet wrote Charles Darwin: A Biography, Vol. 1 - Voyaging comprising pages back in 1995. Textbook and eTextbook are published under ISBN 0394579429 and 9780394579429. Since then Charles Darwin: A Biography, Vol. 1 - Voyaging textbook was available to sell back to BooksRun online for the top buyback price or rent at the marketplace.
Show more

In 1858 Charles Darwin was forty-nine years old, a gentleman scientist living quietly at Down House in the Kent countryside, respected by fellow biologists and well liked among his wide and distinguished circle of acquaintances. He was not yet a focus of debate; his “big book on species” still lay on his study desk in the form of a huge pile of manuscript. For more than twenty years he had been accumulating material for it, puzzling over questions it raised, trying—it seemed endlessly—to bring it to a satisfactory conclusion. Publication appeared to be as far away as ever, delayed by his inherent cautiousness and wish to be certain that his startling theory of evolution was correct.

It is at this point that the concluding volume of Janet Browne’s biography opens. The much-praised first volume, Voyaging, carried Darwin’s story through his youth and scientific apprenticeship, the adventurous Beagle voyage, his marriage and the birth of his children, the genesis and development of his ideas. Now, beginning with the extraordinary events that finally forced the Origin of Species into print, we come to the years of fame and controversy.

For Charles Darwin, the intellectual upheaval touched off by his book had deep personal as well as public consequences. Always an intensely private man, he suddenly found himself and his ideas being discussed—and often attacked—in circles far beyond those of his familiar scientific community. Demonized by some, defended by others (including such brilliant supporters as Thomas Henry Huxley and Joseph Hooker), he soon emerged as one of the leading thinkers of the Victorian era, a man whose theories played a major role in shaping the modern world. Yet, in spite of the enormous new pressures, he clung firmly, sometimes painfully, to the quiet things that had always meant the most to him—his family, his research, his network of correspondents, his peaceful life at Down House.

In her account of this second half of Darwin’s life, Janet Browne does dramatic justice to all aspects of the Darwinian revolution, from a fascinating examination of the Victorian publishing scene to a survey of the often furious debates between scientists and churchmen over evolutionary theory. At the same time, she presents a wonderfully sympathetic and authoritative picture of Darwin himself right through the heart of the Darwinian revolution, busily sending and receiving letters, pursuing research on subjects that fascinated him (climbing plants, earthworms, pigeons—and, of course, the nature of evolution), writing books, and contending with his mysterious, intractable ill health. Thanks to Browne’s unparalleled command of the scientific and scholarly sources, we ultimately see Darwin more clearly than we ever have before, a man confirmed in greatness but endearingly human.

Reviewing Voyaging, Geoffrey Moorhouse observed that “if Browne’s second volume is as comprehensively lucid as her first, there will be no need for anyone to write another word on Darwin.” The Power of Place triumphantly justifies that praise.