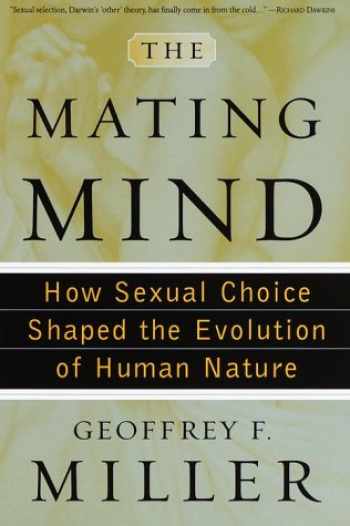 The Mating Mind: How Sexual Choice Shaped the Evolution of Human Nature

Many aspects of how and why the human mind evolved remain mysterious. While Darwinian natural selection has successfully explained the evolution of much of life on earth, it has never seemed fully adequate to explain the aspects of our minds that seem most uniquely and profoundly human--art, morality, consciousness, creativity, and language. Nor has natural selection offered solutions to how the human brain evolved so quickly--in less than 2 million years--and why such a large brain remains unique to our species.

Now, in The Mating Mind, a pioneering work of evolutionary science, these aspects of human nature are at last explored and explained. Until fairly recently most biologists have ignored or rejected Darwin's claims for his other great theory of evolution--sexual selection through mate choice, which favors traits simply because they prove attractive to the opposite sex. But over the last two decades, biologists have taken up Darwin's insights into how the reproduction of the sexiest is as much a focus of evolution as the survival of the fittest.

In this brilliantly ambitious and provocative book, evolutionary psychologist Geoffrey Miller shows the evolutionary power of sexual choice and the reasons why our ancestors became attracted not only to pretty faces and healthy bodies, but to minds that were witty, articulate, generous, and conscious. The richness and subtlety of modern psychology help to reveal how the human mind evolved, like the peacock's tail and the elk's antlers, for courtship and mating.

Drawing on new ideas from evolutionary biology, economics, and psychology, Miller illuminates his arguments with examples ranging from natural history to popular culture, from the art of New Guinea's bowerbirds to the sexual charisma of South Park's school chef. Along the way, he provides fascinating insights into the inarticulacy of teenage boys, the diversity of ancient Greek coins, the reasons why Scrooge was single, the difficulties of engaging with modern art, and the function of sumo wrestling.

Witty, powerfully argued, and continually thought-provoking, Miller's cascade of ideas bears comparison with such pivotal books as Richard Dawkins's The Selfish Gene and Steven Pinker's The Language Instinct. It is a landmark in our understanding of our own species.