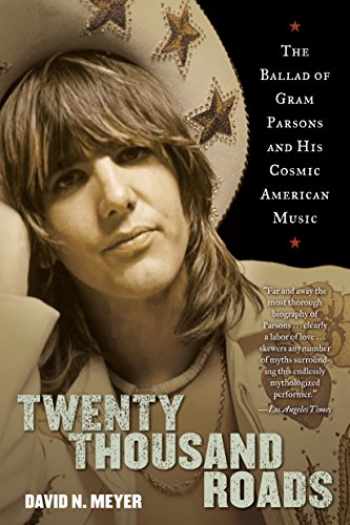 Twenty Thousand Roads: The Ballad of Gram Parsons and His Cosmic American Music

“A terrific biography of a rock innovator that hums with juicy detail and wincing truth. . . . Page after page groans with the folly of the ’60s drug culture, the tragedy of talent toasted before its time, the curse of wealth and the madness of wasted opportunity.”—The Atlanta Journal-Constitution

As a singer and songwriter, Gram Parsons stood at the nexus of countless musical crossroads, and he sold his soul to the devil at every one. His intimates and collaborators included Keith Richards, William Burroughs, Marianne Faithfull, Peter Fonda, Roger McGuinn, and Clarence White. Parsons led the Byrds to create the seminal country rock masterpiece Sweetheart of the Rodeo, helped to guide the Rolling Stones beyond the blues in their appreciation of American roots music, and found his musical soul mate in Emmylou Harris. Parsons’ solo albums, GP and Grievous Angel, are now recognized as visionary masterpieces of the transcendental jambalaya of rock, soul, country, gospel, and blues Parsons named “Cosmic American Music.” Parsons had everything—looks, charisma, money, style, the best drugs, the most heartbreaking voice—and threw it all away with both hands, dying of a drug and alcohol overdose at age twenty-six.

In this beautifully written, raucous, meticulously researched biography, David N. Meyer gives Parsons’ mythic life its due. From interviews with hundreds of the famous and obscure who knew and worked closely with Parsons–many who have never spoken publicly about him before–Meyer conjures a dazzling panorama of the artist and his era.

“Far and away the most thorough biography of Parsons . . . skewers any number of myths surrounding this endlessly mythologized performer.”—Los Angeles Times