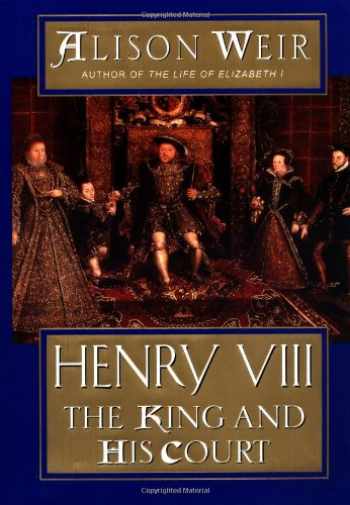 Henry VIII: The King and His Court

Henry VIII, renowned for his command of power, celebrated for his intellect, presided over the most stylish—and dangerous—court in Renaissance Europe. Scheming cardinals vied for power with newly rich landowners and merchants, brilliant painters and architects introduced a new splendor into art and design, and each of Henry's six queens brought her own influence to bear upon the life of the court. In her new book, Alison Weir, author of the finest royal chronicles of our time, brings to vibrant life the turbulent, complex figure of Henry VIII and the glittering court he made his own.

In an age when a monarch's domestic and political lives were inextricably intertwined, a king as powerful and brilliant as Henry VIII exercised enormous sway over the laws, the customs, and the culture of his kingdom. Yet as Weir shows in this swift, vivid narrative, Henry's ministers, nobles, and wives were formidable figures in their own right, whose influence both enhanced and undermined the authority of the throne. On a grand stage rich in pageantry, intrigue, passion, and luxury, Weir records the many complex human dramas that swirled around Henry, while deftly weaving in an account of the intimate rituals and desires of England's ruling class—their sexual practices, feasts and sports, tastes in books and music, houses and gardens.

Stimulating and tumultuous, the court of Henry VIII attracted the finest minds and greatest beauties in Renaissance England—poets Wyatt and Surrey, the great portraitist Hans Holbein, "feasting ladies" like Elizabeth Blount and Elizabeth FitzWalter, the newly rich Boleyn family and the ancient aristocratic clans like the Howards and the Percies, along with the entourages and connections that came and went with each successive wife. The interactions between these individuals, and the terrible ends that befell so many of them, make Henry VIII: The King and His Court an absolutely spellbinding read.

Meticulous in historic detail, narrated with high style and grand drama, Alison Weir brilliantly brings to life the king, the court, and the fascinating men and women who vied for its pleasures and rewards.