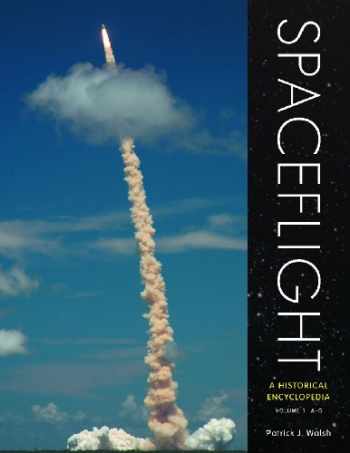 Acknowledged authors Walsh, Patrick J. wrote Spaceflight [3 volumes]: A Historical Encyclopedia comprising 1472 pages back in 2009. Textbook and eTextbook are published under ISBN 031337869X and 9780313378690. Since then Spaceflight [3 volumes]: A Historical Encyclopedia textbook was available to sell back to BooksRun online for the top buyback price or rent at the marketplace.
Show more

This book is a comprehensive history of the first six decades of space exploration, from the end of World War II to the modern era of routine international cooperation in space.

From Sputnik to Soyuz, Mercury 7 to the International Space Station, Spaceflight: A Historical Encyclopedia spans the entire half-century of space travel like no other reference ever published.

The 700 articles in Spaceflight cover every human space mission, as well all significant robotic lunar and planetary space exploration programs, from the 1950s through to the 2008 Space Shuttle and Soyuz flights. While most of the encyclopedia focuses on the United States and former Soviet Union, Spaceflight goes beyond other works of this type to explore the space-related initiatives of countries around the world, including long-time space powers such as France, the other member nations of the European Space Agency, and the emerging space programs of China and India. Many of the entries are biographical, including portraits of NASA's first five groups of astronauts, space shuttle astronauts, Russian cosmonauts, and other non-U.S., non-Russian astronauts who have spent significant time in space.