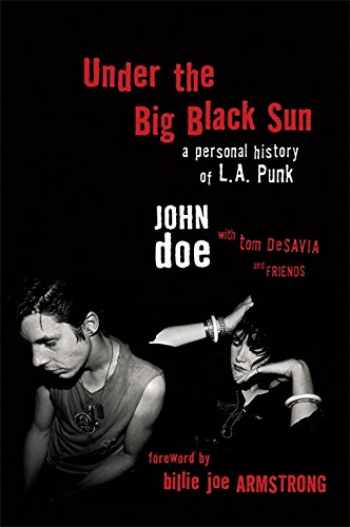 Under the Big Black Sun: A Personal History of L.A. Punk

Under the Big Black Sun explores the nascent Los Angeles punk rock movement and its evolution to hardcore punk as it's never been told before. Authors John Doe and Tom DeSavia have woven together an enthralling story of the legendary West Coast scene from 1977-1982 by enlisting the voices of people who were there. The book shares chapter-length tales from the authors along with personal essays from famous (and infamous) players in the scene. Additional authors include: Exene Cervenka (X), Henry Rollins (Black Flag), Mike Watt (The Minutemen), Jane Wiedlin and Charlotte Caffey (Go-Go's), Dave Alvin (The Blasters), Chris D. (The Flesh Eaters), Robert Lopez (The Zeros, El Vez), Jack Grisham (T.S.O.L.), Teresa Covarrubias (The Brat), as well as scenesters and journalists Pleasant Gehman, Kristine McKenna, and Chris Morris. Through interstitial commentary, John Doe "narrates" this journey through the land of film noir sunshine, Hollywood back alleys, and suburban sprawl, the place where he met his artistic counterparts Exene, DJ Bonebrake, and Billy Zoom and formed X, the band that became synonymous with, and in many ways defined, L.A. punk.

Focusing on punk's evolutionary years, Under the Big Black Sun shares stories of friendship and love, ambition and feuds, grandiose dreams and cultural rage, all combined with the tattered, glossy sheen of pop culture weirdness that epitomized the operations of Hollywood's underbelly. Readers will travel to the clubs that defined the scene, as well as to the street corners, empty lots, apartment complexes, and squats that served as de facto salons for the musicians, artists, and fringe players that hashed out what would become punk rock in Los Angeles.

L.A. punk was born from rock 'n' roll, from country and blues and Latin music, the true next step in the evolution of rock 'n' roll music. It was born of art, culture, political, and economic frustration. It spoke of a Los Angeles that existed when regionalism still reigned in the USA. It sounded like Los Angeles.

For the first time, the stories and photos from this now-fabled era are presented from those on the front lines. Stories that most have never heard about the art that was born under the big black sun.