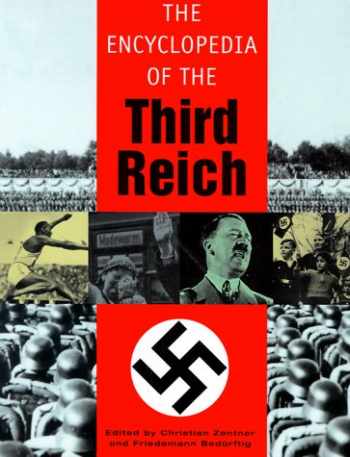 The Encyclopedia Of The Third Reich

Acknowledged authors Zentner, Christian, Bedurftig, Friedemann wrote The Encyclopedia Of The Third Reich comprising 1150 pages back in 1997. Textbook and eTextbook are published under ISBN 0306807939 and 9780306807930. Since then The Encyclopedia Of The Third Reich textbook was available to sell back to BooksRun online for the top buyback price or rent at the marketplace.
Show more

This encyclopedia dissects in unprecedented detail the structure and spirit of the Third Reich. More than 3000 entries by leading German historians encompass the full spectrum of Nazi politics, culture, sports, religion, education, and economics as well as key events, battles, laws, and ideological notions. This volume goes beyond its primary focus on Germany to include articles on other nations and their citizens who were touched by the Third Reich, whether through occupation, alliance, resistance, or collaboration. Sample entries include: abortion, anti-Semitism, architecture, Leo Baeck, Bertolt Brecht, Buchenwald, degenerate art, Marlene Dietrich, Albert Einstein, euthanasia, Anne Frank, Gypsies, Reinhard Heydrich, Hilter Youth, Kristallnacht, Benito Mussolini, neo-Nazism, Olympic Games, Pope Pius XII, Albert Speer, the SS, Stalingrad, Volkswagen, and much more. Over 1200 uncommon photographs, posters, and drawings add a visual dimension that makes this an essential pictorial record of the era as well as an outstanding example of scholarship.