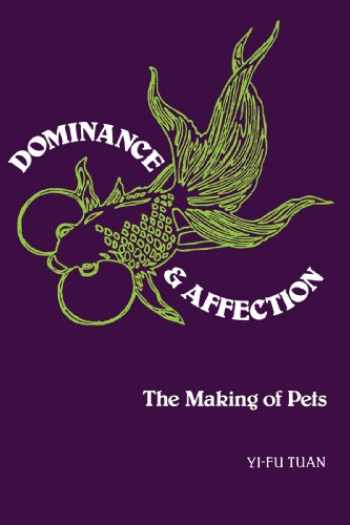 Dominance & Affection: The Making of Pets

Acknowledged authors Tuan, Yi-Fu wrote Dominance & Affection: The Making of Pets comprising 210 pages back in 2009. Textbook and eTextbook are published under ISBN 0300102089 and 9780300102086. Since then Dominance & Affection: The Making of Pets textbook was available to sell back to BooksRun online for the top buyback price of $ 2.00 or rent at the marketplace.
Show more

Is it cruelty or playfulness to breed a variety of goldfish with dysfunctional bulging eyes? Was it an urge for dominance or benevolence that led ladies of eighteenth-century England to keep finely dressed black boys as their pets? Can we be said to abuse a plant when part of our pleasure lies in twisting its stem into the shape of an animal?

This is a provocative book about the psychological impulse to “make pets”―to tame and control inanimate nature, animals, and other humans. Yi-Fu Tuan has amassed a wealth of evidence to show that the human urge for domination―even in the cultural and aesthetic realm―has exhibited itself repeatedly through the ages. He contends that we fail to understand the true nature of pleasure, play, and art unless we put power as well as affection somewhere close to its center.

When we view the beauty of a man-made landscape, we tend to forget that it was often initiated as an exercise in power; in the case of Louis XIV’s Versailles, for example, 30,000 soldiers had to labor day and night to bring water to the arid palace grounds. In the same way, the creation of topiary art and bonsai can be viewed in a dual light: as a playful, pleasurable activity or as a deliberate reminder of our ability to command and impose. Our relationship with animals is another vivid example of our inclination to control. Tuan contends that cruelty to animals is extremely widespread: breeding animals for aesthetic purpose and training them to perform are not only favored hobbies but examples of delight in willful manipulation.

The abuse of power is also seen in the treatment of those human members of a household who become patronized as pets. Children, women, servants, and entertainers have been at different times both highly valued and severely controlled―trained to approach the obedience of inanimate matter or mechanical toys.

Dominance and Affection is likely to change the way we look at ourselves and our “pets.” If it is sobering in the questions it raises about human nature, it is also irresistible in the nature of the varied and fascinating material it lays before the reader.