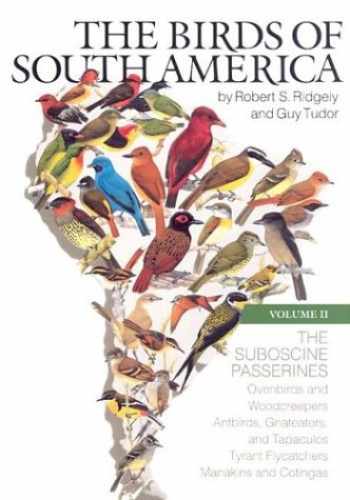 The Birds of South America: Vol. II, The Suboscine Passerines

A land of incredible natural resources, the South American continent is rich in plant and animal species. Among birds alone, over 3,100 species are either resident or migrant. Birds are some of South America's treasures and also one of its most endangered resources. Hence the need for a descriptive record of South American birds that will serve both professional and amateur bird students and encourage conservation of these magnificent species.

Although South American birds elicit much popular and scientific interest, they have never been completely or satisfactorily described and cataloged in a single, published source. The Birds of South America, projected to be a four-volume work, thus fills a critical void. Starting from a museum approach, the authors have examined specimens of each subspecies, comparing them visually and trying to discern the patterns in their plumage variation, both intra- and inter-specifically. They take a new look at bird systematics, reassessing relationships in light of new information. Perhaps most important, they combine this review and analysis with extensive field observations to give an accurate, incisive portrait of the birds in nature.

At a time when rapid development is devastating millions of acres of tropical habitat in South America, this record of an endangered resource becomes crucial. If the birds and other plants and animals of South America are to be saved, they must first be known and appreciated. The Birds of South America is a major step in that direction.

The remaining volumes of The Birds of South America will be:

No release date has been set for the remaining volumes.