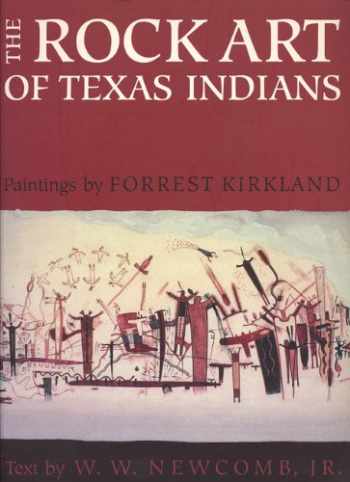 The Rock Art of Texas Indians

The Rock Art of Texas Indians has been long out-of-print, and first editions are rare and costly. This reproduction of that edition will make a monumental and classic work available to a whole new generation of readers.

After viewing Indian rock paintings on a bluff above the Concho River near Paint Rock, Texas, in 1934, the late Dallas artist Forrest Kirkland was seized with an idea. He wrote later, "Here was a veritable gallery of primitive art at the mercy of the elements and the hands of a destructive people. In a few more years only the hundreds of deeply carved names and smears of modern paint would remain to mark the site of the paintings left by the Indians.... What was at first merely a suggestion in my mind soon became a solemn command. I was a trained artist able to make accurate copies of these Indian paintings. I should save them from total ruin."

Kirkland devoted a good part of the rest of his life to copying pictographs and petroglyphs at some eighty far-flung sites in Texas. In The Rock Art of Texas Indians, his meticulous watercolor copies of this rich and diversified art are reproduced, thirty-two in full color, the rest in black and white. The informative and engaging text is contributed by W. W. Newcomb, Jr., former director of the Texas Memorial Museum and author of The Indians of Texas.

The petroglyphs and pictographs reproduced here, states Professor Newcomb, "are relatively rare and absolutely irreplaceable human documents. They can often reveal much about the ways of ancient men, including aspects of life which otherwise would forever go unrecorded, for they may illustrate how a vanished, nameless people perceived themselves and their world, their relation to God and to each other, and their fantasies and fears. They are, then, a treasure to be valued and a heritage to be preserved."