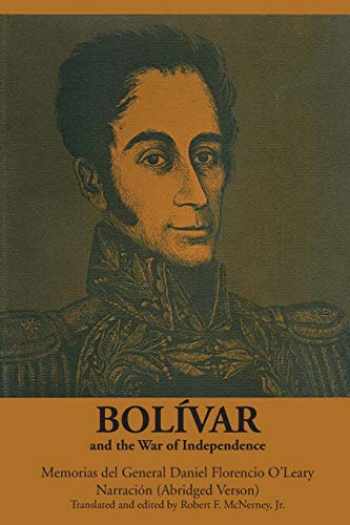 Bolívar and the War of Independence

Acknowledged author Daniel Florence O'Leary wrote Bolívar and the War of Independence comprising 385 pages back in 1975. Textbook and eTextbook are published under ISBN 0292707150 and 9780292707153. Since then Bolívar and the War of Independence textbook was available to sell back to BooksRun online for the top buyback price of $ 2.80 or rent at the marketplace.
Show more

The overthrow of Spanish rule and the birth of new republican governments in northern South America at the beginning of the nineteenth century were in large part the work of one man—Simón Bolívar. Bolívar was not only the soldier who built a patriot army from a small band of exiles and led them victoriously across Venezuela and down the spine of the Andes as far as Potosí; he was also the statesman who framed the new republics that sprang to life after the defeat of the Spanish and who called the Congress of Panama in hopes of making real his dream of uniting all the South American republics in a single confederation. He was truly the Liberator.

The Narración, or narrative, of the Memorias of Daniel Florencio O’Leary has long been recognized by Spanish American scholars as one of the most important historical sources for a major part of Bolívar’s life. O’Leary took an active part in the wars for independence, first as a young officer, recruited in the British Isles to aid the patriot cause, and later as Bolívar’s chief aide, often entrusted with diplomatic missions. His firsthand knowledge of the stirring events of the period, his access to relevant documents, and his close association with the major figures in the struggle, as well as his friendship with Bolívar, made O’Leary a particularly valuable chronicler and biographer. Bolívar himself, shortly before his death, requested that O’Leary write the story of his life.

O’Leary’s meticulous attention to military and diplomatic maneuvers and his keen, sometimes acrid, comments on both men and events give the reader not only a vivid portrait of Bolívar—the man and his achievements—but also a remarkable insight into O’Leary’s own position as an autocratic-minded participant in the wars for independence. Although O’Leary’s devotion to, and admiration for, his Chief make for an occasionally partisan view, his stark account of the hardships and disappointments that Bolívar and his armies overcame against almost impossible odds does much to balance the narrative.

In his abridged translation, Robert McNerney has omitted the Apéndice, documents that O’Leary, had he lived, undoubtedly would have used as the source for completing his account of Bolívar’s life. Numerous letters and documents scattered through the original text also have been omitted, leaving a highly readable narrative.