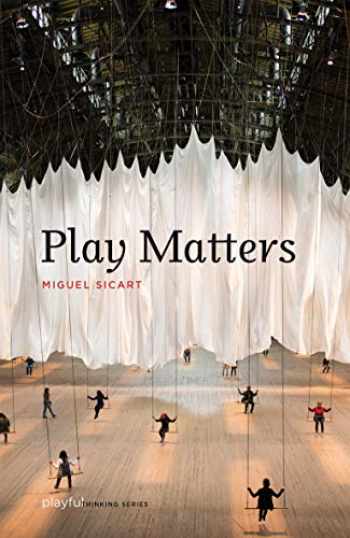 Why play is a productive, expressive way of being, a form of understanding, and a fundamental part of our well-being.

What do we think about when we think about play? A pastime? Games? Childish activities? The opposite of work? Think again: If we are happy and well rested, we may approach even our daily tasks in a playful way, taking the attitude of play without the activity of play. So what, then, is play? In Play Matters, Miguel Sicart argues that to play is to be in the world; playing is a form of understanding what surrounds us and a way of engaging with others. Play goes beyond games; it is a mode of being human.

We play games, but we also play with toys, on playgrounds, with technologies and design. Sicart proposes a theory of play that doesn't derive from a particular object or activity but is a portable tool for being―not tied to objects but brought by people to the complex interactions that form their daily lives. It is not separated from reality; it is part of it. It is pleasurable, but not necessarily fun. Play can be dangerous, addictive, and destructive.

Along the way, Sicart considers playfulness, the capacity to use play outside the context of play; toys, the materialization of play―instruments but also play pals; playgrounds, play spaces that enable all kinds of play; beauty, the aesthetics of play through action; political play―from Maradona's goal against England in the 1986 World Cup to the hactivist activities of Anonymous; the political, aesthetic, and moral activity of game design; and why play and computers get along so well.