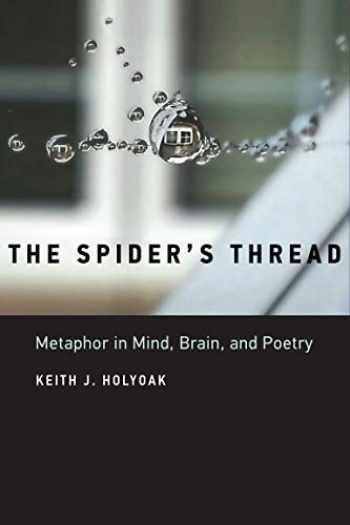 The Spider's Thread: Metaphor in Mind, Brain, and Poetry (The MIT Press)

An examination of metaphor in poetry as a microcosm of the human imagination―a way to understand the mechanisms of creativity.

In The Spider's Thread, Keith Holyoak looks at metaphor as a microcosm of the creative imagination. Holyoak, a psychologist and poet, draws on the perspectives of thinkers from the humanities―poets, philosophers, and critics―and from the sciences―psychologists, neuroscientists, linguists, and computer scientists. He begins each chapter with a poem―by poets including Samuel Taylor Coleridge, Sylvia Plath, Walt Whitman, Emily Dickinson, Robert Frost, Theodore Roethke, Du Fu, William Butler Yeats, and Pablo Neruda―and then widens the discussion to broader notions of metaphor and mind.

Holyoak uses Whitman's poem “A Noiseless Patient Spider” to illustrate the process of interpreting a poem, and explains the relevance of two psychological mechanisms, analogy and conceptual combination, to metaphor. He outlines ideas first sketched by Coleridge―who called poetry “the best words in their best order”―and links them to modern research on the interplay between cognition and emotion, controlled and associative thinking, memory and creativity. Building on Emily Dickinson's declaration “the brain is wider than the sky,” Holyoak suggests that the control and default networks in the brain may combine to support creativity. He also considers, among other things, the interplay of sound and meaning in poetry; symbolism in the work of Yeats, Jung, and others; indirect communication in poems; the mixture of active and passive processes in creativity; and whether artificial intelligence could ever achieve poetic authenticity. Guided by Holyoak, we can begin to trace the outlines of creativity through the mechanisms of metaphor.