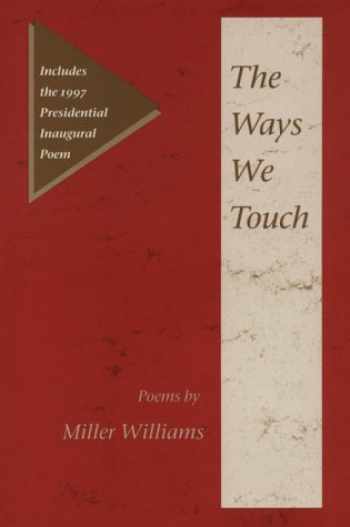 Includes
"Of History and Hope,"
the 1997 Presidential Inaugural Poem
When Miller Williams
read his Inaugural Poem, "Of History and Hope," to a world-wide
audience in January, his proverbial "fifteen minutes of fame"
lasted far less--somewhere between three and four minutes. That was long
enough to make a big impact on many. Said poet Paul Zimmer, one of the
millions in his viewing audience, "I came up out of my Lazy-Boy and
cheered loudly!"
Williams is an
American original whose poems have been praised for both the elegance
of their style and the simplicity of their language, for their wonderful
humor and genuine passion. The works in his newest collection, The
Ways We Touch, may be nostalgic or challenging, humorous or full of
moral fortitude; always Williams speaks with the kind of insight that
rises from wisdom and experience.
Praise for Williams's
earlier work:
"Miller
Williams is one of those writers whose books drag me snorkeling happily
along. Happy as a pig among truffles, I hurry to the next treasure."
-- William Stafford
"Most contemporary
poets might well go to him for lessons in the art of speaking plainly
in disciplined lines alive with emotional energy." -- X. J. Kennedy
"Better
than almost anything else being published." -- Donald Justice