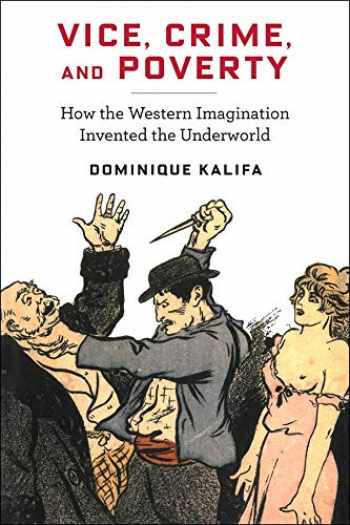 Vice, Crime, and Poverty: How the Western Imagination Invented the Underworld (European Perspectives: A Series in Social Thought and Cultural Criticism)

Beggars, outcasts, urchins, waifs, prostitutes, criminals, convicts, madmen, fallen women, lunatics, degenerates―part reality, part fantasy, these are the grotesque faces that populate the underworld, the dark inverse of our everyday world. Lurking in the mirror that we hold up to our society, they are our counterparts and our doubles, repelling us and yet offering the tantalizing promise of escape. Although these images testify to undeniable social realities, the sordid lower depths make up a symbolic and social imaginary that reflects our fears and anxieties―as well as our desires.

In Vice, Crime, and Poverty, Dominique Kalifa traces the untold history of the concept of the underworld and its representations in popular culture. He examines how the myth of the lower depths came into being in nineteenth-century Europe, as biblical figures and Christian traditions were adapted for a world turned upside-down by the era of industrialization, democratization, and mass culture. From the Parisian demimonde to Victorian squalor, from the slums of New York to the sewers of Buenos Aires, Kalifa deciphers the making of an image that has cast an enduring spell on its audience. While the social conditions that created that underworld have changed, Vice, Crime, and Poverty shows that, from social-scientific ideas of the underclass to contemporary cinema and steampunk culture, its shadows continue to haunt us.