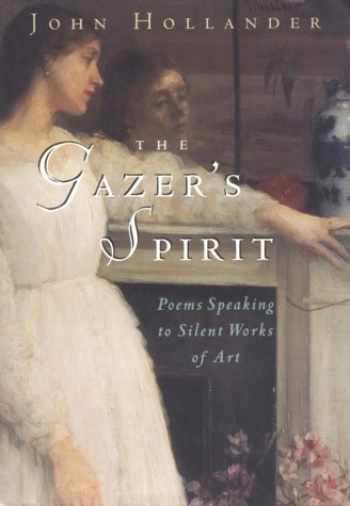 The Gazer's Spirit: Poems Speaking to Silent Works of Art

This magnificent book is a gallery of words and images that celebrates the sister arts of poetry and painting. John Hollander, the eminent poet and critic, has selected more than fifty works of art—paintings, prints, drawings, photographs, and sculptures from antiquity to the present—and matched them to poems that address the same images in their verses. The result is an illuminating and ingeniously organized chronicle of words and images in conversation, as well as a powerful introduction to how, across Western culture, great writers have been inspired by pictures.

The Gazer's Spirit focuses on leading examples of ecphrastic poetry, or poems that directly confront particular works of art. Hollander, who is one of the most distinguished contemporary practitioners of the ecphrastic tradition, has crafted a survey of enormous range, taste, and depth, from the Renaissance to the twentieth century. The heart of the book is its gallery of poems and images set side by side.

There are poems whose presence in this book is all but inevitable, such as Auden's "Musee des Beaux Arts" paired with Breugel the Elder's Landscape with the Fall of Icarus, and delightful surprises, such as Edith Wharton's sonnet that casts fresh light on Leonardo's Mona Lisa. Here are Robert Browning and Michelangelo; Walt Whitman and George Inness; and Randall Jarrell and Albrecht Dürer writing and drawing about The Knight, Death and the Devil.

Among the poets are many visually sophisticated writers such as James Merrill, Richard Howard, Marianne Moore, and Richard Wilbur; the visual objects in the book are both celebrated and obscure, as various as a Greek sculplture, a medieval tapestry, a famous Renoir, or a fountain by an anonymous architect. In some cases, obvious affinities, such as a poem by Vicki Hearne on a white horse by Gauguin, produce unexpected poetic results.