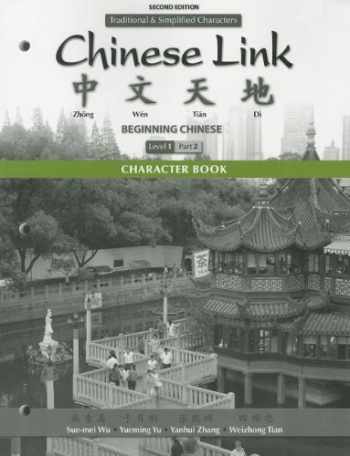 The Character Book, which can be used to learn both Simplified and Traditional Chinese characters, provides the Chinese characters for the core vocabulary in every lesson of Chinese Link Level 1/ Part 2, 2e to help learners practice their writing skills. It shows the following for each character:

1. Character with its stroke order indicated by numbers

2. Traditional form of the character

3. Simplified form of the character

6. Radical of the character with its Pinyin pronunciation and meaning

Blank boxes are also included for learners to practice writing the character. As a handy reference, three types of indices are provided in the Character Book: (1) By number of strokes; (2) By Lesson number; (3) Alphabetic by Pinyin and a list of Common Radicals.