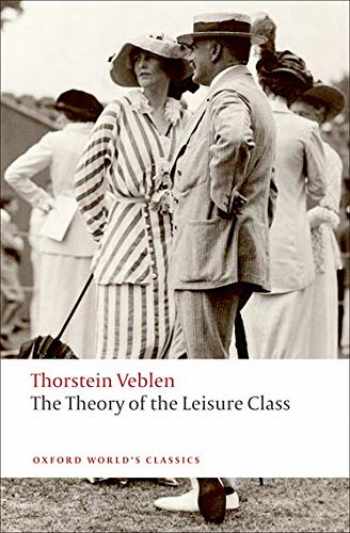 The Theory of the Leisure Class (Oxford World's Classics)

In his scathing The Theory of the Leisure Class, Thorstein Veblen produced a landmark study of affluent American society that exposes, with brilliant ruthlessness, the habits of production and waste that link invidious business tactics and barbaric social behavior. Veblen's analysis of the evolutionary process sees greed as the overriding motive in the modern economy, and with an impartial gaze he examines the human cost paid when social institutions exploit the consumption of unessential goods for the sake of personal profit. Fashion, beauty, animals, sports, the home, the clergy, scholars--all are assessed for their true usefulness and found wanting. Indeed, Veblen's critique covers all aspects of modern life from dress, class, the position of women, home decoration, industry, business, and sport, to religion, scholarship, and education. The targets of Veblen's coruscating satire are as evident today as they were a century ago, and his book still has the power to shock and enlighten. Martha Banta's introduction illuminates Veblen's uncompromising arguments as it highlights the literary force of Veblen's writing and its influence on later American writers such as Edith Wharton, Henry James, Dos Passos, and F. Scott Fitzgerald. She also sheds light on his critique of the plight of women and his evolutionary arguments as they relate to modern society.

About the Series: For over 100 years Oxford World's Classics has made available the broadest spectrum of literature from around the globe. Each affordable volume reflects Oxford's commitment to scholarship, providing the most accurate text plus a wealth of other valuable features, including expert introductions by leading authorities, voluminous notes to clarify the text, up-to-date bibliographies for further study, and much more.