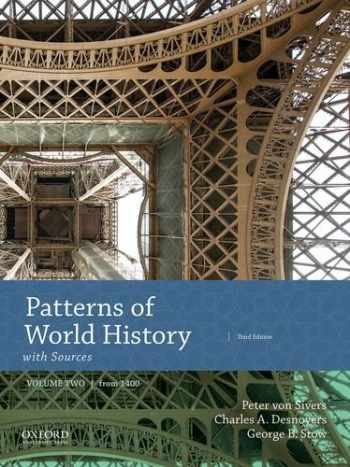 Patterns of World History: Volume Two: From 1400 with Sources

Patterns of World History, Third Edition, offers a distinct framework for understanding the global past through the study of origins, interactions, and adaptations. Authors Peter von Sivers, Charles A. Desnoyers, and George B. Stow examine the full range of human ingenuity over time and space in a comprehensive, evenhanded, and critical fashion.

The authors offer a distinct intellectual framework for the role of innovation and historical change through patterns of origins, interactions, and adaptations. Each small or large technical or cultural innovation originated in one geographical center or independently in several different centers. As people in the centers interacted with their neighbors, the neighbors adapted to and in many cases were transformed by the innovations. By "adaptation" the authors include the entire spectrum of human responses, ranging from outright rejection to creative borrowing and, at times, forced acceptance. Seeing patterns of various kinds in historical development brings to light connections and linkages among peoples, cultures, and regions that might not otherwise present themselves.

Such patterns can also reveal differences among cultures that other approaches to world history tend to neglect. For example, the differences between the civilizations of the Eastern and Western Hemispheres are generally highlighted in world history texts, but the broad commonalities of human groups creating agriculturally based cities and states in widely separated areas also show deep parallels in their patterns of origins, interactions, and adaptations. Such comparisons are at the center of Patterns of World History. This kind of analysis offers insights into how an individual innovation was subsequently developed and diffused across time and space that is, the patterns by which the new eventually becomes a necessity in daily lives. Through all of this we gain a deeper appreciation of the unfolding of global history from its origins in small, isolated areas to the vast networks of global interconnectedness in our present world.

The authors' use of a broad based understanding of continuity, change, and innovation allows them to restore culture in all its individual and institutionalized aspects spiritual, artistic, intellectual, scientific to its rightful place alongside technology, environment, politics, and socioeconomic conditions. Understanding innovation in this way allows this text to help illuminate the full range of human ingenuity over time and space in a comprehensive, evenhanded, and open ended fashion.