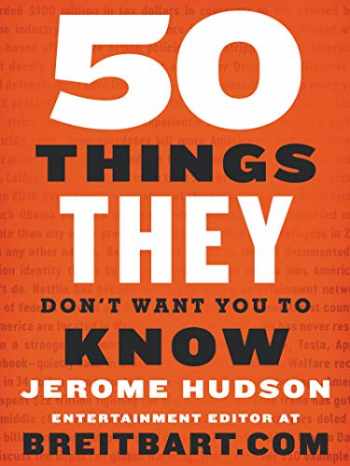 50 Things They Don't Want You to Know

The Publishers Weekly and USA Today bestseller the New York Times refused to include on their list.

Breitbart.com editor Jerome Hudson delivers the red pills his readers know him for, showing you the facts, statistics, and analysis that the mainstream media have worked so hard to hide.

If you heard that one president deported more people than any other president, started the program of family separation, and did nothing to stop Russia’s election meddling, how many of them would guess it was Obama?

In 50 Things They Don’t Want You to Know, Jerome Hudson dives deeply into the things Americans are not supposed to realize. Many of our most hotly debated topics are shaped by Davos power brokers, woke college professors, TV talking heads, social media activists, and feckless Washington swamp monsters who want you to only follow their narrative.

Your teachers, your politicians, and your local paper are not likely to ever tell you:

Once you’re done reading 50 Things They Don’t Want You to Know, you’ll never trust the powers that be to give you the whole truth again.