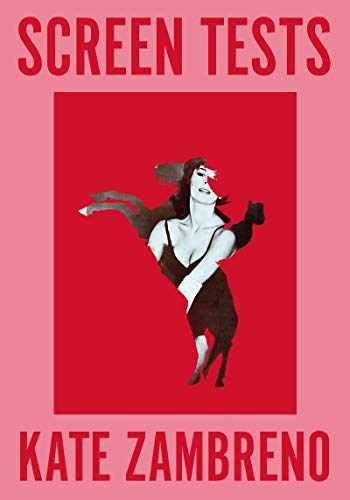 Screen Tests: Stories and Other Writing

Acknowledged authors Zambreno, Kate wrote Screen Tests: Stories and Other Writing comprising 304 pages back in 2019. Textbook and eTextbook are published under ISBN 0062392042 and 9780062392046. Since then Screen Tests: Stories and Other Writing textbook was available to sell back to BooksRun online for the top buyback price of $ 0.30 or rent at the marketplace.
Show more

A new work equal parts observational micro-fiction and cultural criticism reflecting on the dailiness of life as a woman and writer, on fame and failure, aging and art, from the acclaimed author of Heroines, Green Girl, and O Fallen Angel.

In the first half of Kate Zambreno’s astoundingly original collection Screen Tests, the narrator regales us with incisive and witty swatches from a life lived inside a brilliant mind, meditating on aging and vanity, fame and failure, writing and writers, along with portraits of everyone from Susan Sontag to Amal Clooney, Maurice Blanchot to Louise Brooks. The series of essays that follow, on figures central to Zambreno’s thinking, including Kathy Acker, David Wojnarowicz, and Barbara Loden, are manifestoes about art, that ingeniously intersect and chime with the stories that came before them.

"If Thomas Bernhard's and Fleur Jaeggy's work had a charming, slightly misanthropic baby—with Diane Arbus as nanny—it would be Screen Tests. Kate Zambreno turns her precise and meditative pen toward a series of short fictions that are anything but small. The result is a very funny, utterly original look at cultural figures and tropes and what it means to be a human looking at humans.”—Amber Sparks

“In Screen Tests, a voice who both is and is not the author picks up a thread and follows it wherever it leads, leaping from one thread to another without quite letting go, creating a delicate and ephemeral and wonderful portrait of how a particular mind functions. Call them stories (after Lydia Davis), reports (after Gerald Murnane), or screen tests (inventing a new genre altogether like Antoine Volodine). These are marvelously fugitive pieces, carefully composed while giving the impression of being effortless, with a quite lovely Calvino-esque lightness, that are a joy to try to keep up with.”—Brian Evenson