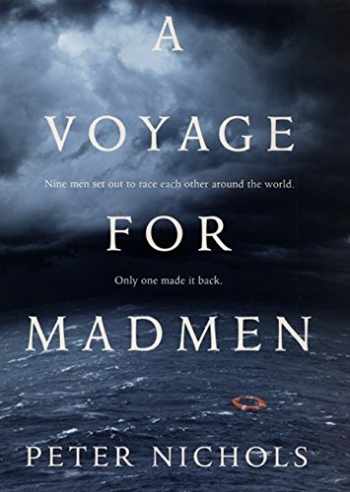 A Voyage For Madmen

Acknowledged authors Nichols, Peter wrote A Voyage For Madmen comprising 320 pages back in 2001. Textbook and eTextbook are published under ISBN 0060197641 and 9780060197643. Since then A Voyage For Madmen textbook was available to sell back to BooksRun online for the top buyback price or rent at the marketplace.
Show more

On April 22, 1969 -- three months before Neil Armstrong's walk on the Moon -- the world watched as a small sailboat came ashore at Falmouth, England, completing a voyage of astonishing courage and endurance that would forever alter our ongoing adventure with the sea. Ten months earlier, nine very different men had set off in small and ill-equipped boats, determined to do the impossible: sail around the world alone and without stopping, to win the race dubbed the Golden Globe. Only one of the nine would cross the finish line -- to fame, wealth, and glory. For the others, the rewards would be despair, madness, and death.

The men were inspired by Sir Francis Chichester, who had become a national hero in Britain for stopping only once (in Australia) while sailing alone around the world. Suddenly what had seemed impossible-to circumnavigate the world alone and nonstop -- now appeared within reach. For nine driven men -- among them Robin Knox-Johnston, a young Merchant Marine captain; Bernard Moitessier, a French mystic; Donald Crowhurst, a brilliant, troubled electrical engineer; and Chay Blyth, an Army sergeant who had rowed across the Atlantic in 1966 but did not know how to saila gauntlet had been thrown down, a challenge they found themselves overwhelmingly and inexplicably compelled to accept.

Though the Golden Globe race was the progenitor of (and inspiration for) the Vendee Globe and the Race of the Millennium, its participants had more in common with Captain Cook and Ferdinand Magellan than with today's high-tech sailor. There was no satellite navigational system, no onboard computer, no cell phone or fax line connecting them to the world beyond -- or to possible rescuers. They survived on their wits and ingenuity, navigating by sextant, sun, and stars. Their most sophisticated technology -- when it worked -- was a radio.

A Voyage for Madmen is a remarkable story of individuals against the sea, of men driven by their dreams and demons to live for months on end in a cabin roughly the size of a Volkswagen. To succeed they must endure the harshest of weather; stave off unimaginable loneliness in the forbidding Southern Ocean; navigate unassisted through the world's most treacherous waters off the Cape of Good Hope and Cape Horn; and, time and again, face -- alone -- those fateful moments when a single decision could mean the difference between life and death.

With a novelist's eye for detail and a seaman's knowledge of the joys and perils of blue water, Peter Nichols has crafted a classic tale of endurance and adventure -- a fitting chronicle of how these obsessed sailors, "in their puny and inadequate boats, undertook the last great maritime feat...and how, one by one, the sea cut them down."