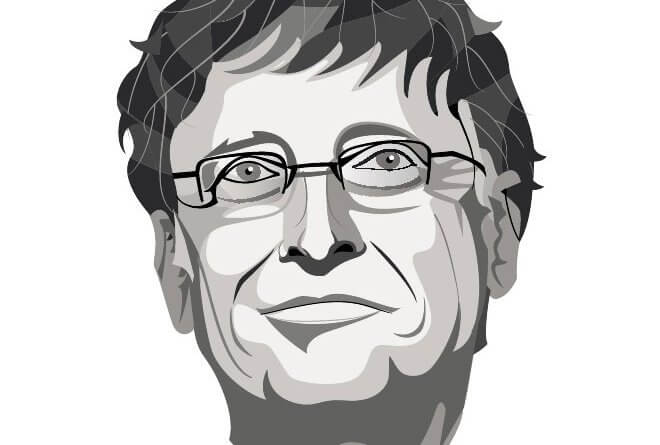 “My philosophy is that I’d rather have too much to read on a trip than too little.”— Bill Gates

Check below Bill Gates’ book list 2019 from his gatesnotes.com blog and see what is the next book you are going to read before Christmas!

This latest bestseller by Jared Diamond is surely worth a read! The Pulitzer-Prize-winning author of the bestselling book “Guns, Germs ad Steel and Collapse”, Diamond transformed our perception of what causes civilizations to rise to the top or fall.

In this third book in his international bestseller trilogy, the author comes back with his contemplations on why some nations recover from traumatic events, and others don’t. He demonstrates how certain nations are successful in adopting a coping mechanism that lets them recover from the crisis.

While exploring the reaction of societies during moments of crisis, the author implements interesting case studies in this popular book. There are documented references how nations manage existential challenges throughout history–this includes civil wars, foreign expansion threats and other types of aggression. Jared Diamond compares the management of recent upheavals in 6 successful countries – the forced opening of Japan by US Commodore Perry’s fleet, the Soviet Union’s attack on Finland, coup d’état in Chile and Indonesia as well as post-war healing of Austria and Germany. The author judges these events from a personal perspective since he has lived and spoken the language in 5 of these 6 countries. He presents first-hand facts about how these nations survived critical events through the adaptive mechanisms: acknowledgment of responsibility, open self-appraisal and learning from other nations.

In parallel, Diamond examines whether the US, Japan and the rest of the world are implementing such mechanisms to overcome severe crises they are currently facing. He is asking his readers whether we can learn from the lessons of the past?

At the beginning this New York Times bestselling book might sound a little bit depressing. Once you continue to dive into the text, you will realize that the main point of the author is that humanity has always managed to find solutions to the serious problems we have mentioned before. Having a usual in-depth analysis of history, geography, and anthropology as in other Diamond’s books, Upheaval reveals a lot of factors that are critical for overcoming big challenges. That is why it is the most personal book of the author so far.

This top-rated book is about blood, in fact about a lot of blood. If you happen to be someone who is not feeling at ease with these matters, we do not advise to read this book! Otherwise, we are pretty sure you will find this book nothing less than fascinating! Written by a renowned British journalist who has a deep emotional connection to the subject of the book, this best-selling book is filled with exciting and interesting facts that will transform your regular appreciation of blood.

The title of the book “Nine Pints” refers to the volume of blood in an average adult. However, in the opening scene of this top bestseller, there are only 8 pints of blood since the author has given one pint to the NHS Blood and Transplant service. This act of giving blood has been historically a recurring feature in medicine. For centuries, bloodletting used to be a “cure” for every imaginable illness. Since ancient times, leeches constituted an important part of medical wisdom. They had become so indispensable that it was possible to make fortunes with them. This leeches’ craze had continued until the 19th century until they came back recently at the age of surgical technology. It has been found out that vampiric worms are the most precise tool to remove the dangerous blood congestion that can build up in reattached body parts.

Blood has been associated with destructive diseases as well. The author has traveled widely to gather first-hand information about the prevention and treatment of the severe HIV/Aids crisis in the world. Written in an excellent journalistic tradition, the book “Nine Pints” shows how the Aids crisis in South Africa was partly human-made and how it led to thousands of human deaths. Rose George shows how the government in South Africa was not successful in preventing the spread of this dangerous disease due to quack treatments from 1999 to 2008. These are very recent times and the virus is still proliferating in this area.

In her top-selling book, the author shows how the sugar daddy culture and liberalized sex trade led to a public health hazard in this country. Speaking from her personal experience, George makes us aware of the price of ignorance that women have to pay with their blood. “Blessers”, these older men making gifts to school-aged girls in exchange for unprotected sexual pleasures, are blood villains.

At the same time, Rose George speaks in her book about blood heroes. The author refers to Arunachalam Muruganantham, aka “Menstrual Man”, who is a social entrepreneur in India. He invented a cheap and reliable process to produce pads for his community after he saw his wife using dirty old rags. Other blood heroes include Janet Vaughan, a pioneering doctor, and Percy Oliver, a civic-minded volunteer, who helped to create the modern blood service during the second world war.

“Blood is not done teaching us what it can do. More wonders will come,”

It is not surprising that Bill Gates recommends this vital and absorbing book by one of the best non-fiction writers today!

A Gentleman in Moscow

One of the most popular books this year, it seems that everyone has read this book by Amor Towles! This mega-bestseller counts already more than 1.5 million readers and will soon be turned into a major TV series.

Jared Diamond, the New York Times bestselling author of Rules of Civility, this time prepared an adventurous novel about a count who was sentenced to life after being arrested in a Moscow luxury hotel located across the street from the Kremlin. Count Alexander Rostov has never worked in his entire life. New circumstances push him to adapt to a new life in an attic room in the Metropol. Unexpectedly, this leads the protagonist into a new and exciting world of emotional self-discovery. His psychological unfoldment happens during the most painful decades in Russian history which lets the reader understand better the whole dramatic journey of the Russian nation. Every page of this top-rated bestseller book is filled with humor and demonstrates Count Rostov’s endeavors of what it means to be a man of purpose.

Presidents of War by Michael Beschloss

Another book on the New York Times bestseller list, and this time it is about the Vietnam war and the other 8 major conflicts that the US entered between the beginning of the 19th century and the 1970s. After ten years of research, this top-rated book gives an intimate look at a succession of American presidents who initiated the conflict and later on mobilized the country for victory. You will be taken to the room where the most difficult decisions had to be taken by the Presidents about sending hundreds and thousands of American citizens to their deaths.

Beginning from the 4th American President James Madison and the War of 1812, we will see what happens behind the curtains: the power struggles with Congress, the courts, the press, and anti-war protesters. At the same time, the top-selling author Michael Beschloss shows that nothing human is alien to the US Presidents either. Seeking comfort from their dear significant others and family members, praying on their knees helps them survive difficult times. All these elements combine into a wholesome picture of physical and emotional strains that the pressures of war inevitably cause for any human including the president.

One of the top books to read this year, “Presidents of War” sounds particularly resonating due to the truthfulness of the story and its characters. The author successfully uses the original sources–interviews with surviving participants, original letters, diaries, and even once-classified national security documents– to paint the American historical context of the past two centuries as no one did that before. It is unbelievable how far we have gone from the times of our Founders, who constrained presidential power, to our modern times. Today one single leader can potentially start a nuclear war and destroy the human race. This book from Bill Gates Reading List 2019 gives food for thought for every reader.

The topic of the Vietnam war is particularly close to Bill Gates. In numerous interviews Gates mentions that he often questioned himself how he would perform in combat if he had not missed the cutoff to serve in the war.

“Would I have shown courage under fire? Like many people who have not served, I have my doubts.” — Bill Gates

The Future of Capitalism by Paul Collier

Paul Collier is a renowned development economist who diagnoses the drawbacks of our current capitalist system and offers a realistic vision of how it can be modified and improved. The author’s latest best-selling book indicates the trajectory of where capitalism is headed. We are living at the time of serious conflicts: rich cities versus rural counties, the highly skilled and successful elite versus the less educated, wealthy versus developing countries.

The notions of the post-war social democracy have been significantly distorted: there is no ethical obligation anymore to take care of every member of our society. The divides continue to aggravate under the cover of socialism and populism.

One of the best New York Times bestsellers nonfiction books, “The Future of Capitalism” demonstrates in an original way how to heal such economic, cultural and social rifts pragmatically. This top-rated book is very successful because the author dwells on his personal experience. He shows how to save capitalism from itself: growing up in working-class Sheffield, he later moved to hyper-competitive Oxford and worked between the UK and Africa. This experience gave an unprecedented opportunity to Collier to comprehend all the failings of his profession. Using the works of the most brilliant social scientists of the twentieth century, he gives a smart perspective of tackling social inequalities amidst this ideological revivalism and ever-growing individualism.