12 Best Libraries Every Book Lover Should Visit One Day 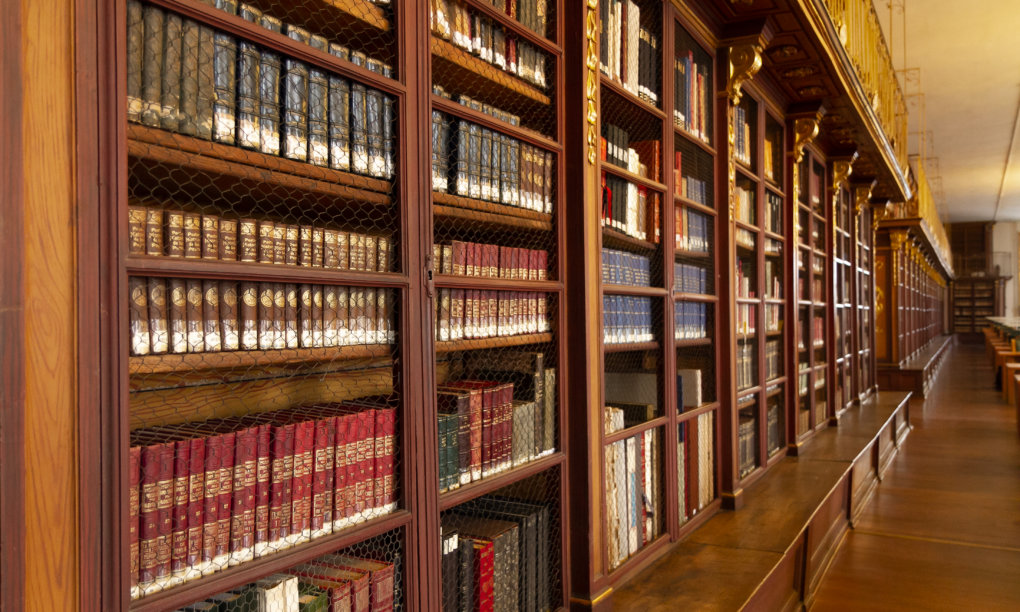 Historically these temples of knowledge have been built to inspire, command respect and impress the ones who decide to pass through the entrance gates. The connotations might have evolved over the time from the library to information and media centre as well as the style could have changed from massive stone walls to transparent futuristic facades — but the idea of a provider of information has stayed the same. For students and researchers libraries have become their best friends: remember how much time you spent there preparing your thesis college paper or getting ready for the exams! College library is your second home! Even if you buy all your books online (BooksRun has the best offers on all kinds of textbooks and other literature) or you have switched to e-books, a library is still the best space for studying and doing research. If you are planning on going abroad for a study exchange program or you are thinking of doing your PhD in a different part of the world, a good library in the area can be your most loyal ally!

If you are mesmerized by all those gorgeous library buildings and want to know more about their history (what is the oldest library? when did the cataloging system develop?), check out this photogenic guide The Library: A World History. This book, marvelously made and full of exciting materials, can be a good item on your wishlist or a present to a friend who shares your love for libraries!

Here at BooksRun, we prepared a selection of the best and most impressive libraries from around the world – check it out and visit them if you have occasion to be nearby.

Baltimore public library is one of the best and most beautiful libraries in the US and in the world. It was funded by the American philanthropist George Peabody who built it as a gift to the citizens of the city of Baltimore to thank them for their hospitality and kindness. The 19th-century architect Edmund Lind designed a very impressive interior with a soaring five-storey atrium that lets you feel surrounded by books. This neoclassical library houses a 300,000 volume collection dedicated to British and American art, history and literature. The skylight roof lets the natural light inside the atrium making a contrast with beautifully illuminated library compartments behind the cast-iron balconies. The view is breath-taking and very romantic which is why the atrium is often featured in movies or used for wedding celebrations and special private events. This old library is an absolute stunner and definitely deserves a visit!

One of the top college libraries in the world, the Trinity Library is home to a lot of famous tomes like the Book of Kells, the illuminated manuscript dating back to 800 AD, which comprises the first four gospels of the New Testament. The surroundings of the Old Library are breath-taking including the 65-metre long Long Room housing 200,000 of the oldest books of the western world. No wonder that is served as an inspiration for the Jedi temple archives in the Star Wars Episode II: Attack of the Clones movie! Its barrel vaulted ceilings and impressive 18th-century wooden-carved balconies create an unforgettable ambience of history right in front of you! Trinity College Library always features on the list of the top 10 libraries in the world and is a must-see attraction in Dublin.

One of the top public libraries that the world has on offer, the system of New York’s Public Library makes it also the fourth largest library in the world with its 93 branches spread across Manhattan, the Bronx and Staten Island. The library has appeared as a cameo in such iconic in popular culture movies as Ghostbusters as well as Breakfast at Tiffany’s. You will not be able to appreciate the full beauty of this magnificent building if you do not enter the high-vaulted Rose Main Reading Room with its grand windows, solemn chandeliers, beautifully decorated ceiling, and shelves full with books. Just imagine doing revising for your exam in such an exuberant surrounding —that’s indeed the power of books and print for learning even in our digital world! You can find some interesting insight into the architecture of this huge library in the video from Architectural Digest below:

The Library of Saint Geneviève is another prime example of one of the best historical libraries in the world. Completed in 1850, it was considered one of the best cultural buildings in the world ever built at that time with its iron piping and innovative wrought-iron structures. Today it might not hold the title of the most modern building but it definitely stays as one of the most beautiful and elegant cultural buildings. This library appeared following the St Benedict sanction to form monastic libraries in France. St Genevieve is one of the oldest and largest abbeys in Paris and it is not surprising that a huge library was already amassed by the 12th  century and continued to grow ever after. Today this library is the main research and reference centre for the students of the University of Paris. In this library, it is possible to find the 226 volumes from the earliest collections dating back to the 12th century.

Prague’s Klementinum Library is a unique Baroque building that had been opened as part of a Jesuit complex even before the times when Vienna was built. Vividly decorated with frescoes on domed ceilings, with its marble floors and intricate wooden columns between the bookshelves, this library is a piece of art in itself! No wonder it is called the world’s most beautiful library! The main room of this library is filled with antique clocks, books and globes from all over the world. It houses over 20,000 tomes of the most important theological and medical literature in the world.

This beautiful Austrian library has one of the most impressive interiors and it is set against breath-taking scenery – as it is located in the foothills of the Alps. Also, it is the second-biggest monastery library in the world. The 230-foot-long central library hall containing 200,000 historical volumes, was designed by the renowned architect Joseph Hueber in 1776. Its most impressive feature is the ceiling designed by Bartolomeo Altomonte which shows the evolution of the human knowledge till the point of the Divine Revelation.

Now it is the time for contemporary libraries! This 9-story structure resembles a glass Rubik cube which glows during sunset and beams with illumination at night. The library’s interior is designed in pristine white colour turning it into the “church of knowledge”: this way nothing will distract you from conducting your research! The pantheon of ancient Rome served as an inspiration for the library and that is why you will feel the solemn spirit when you are inside the building. The only colour comes from books and visitors.

One of the most iconic buildings of contemporary architecture, this Seattle library was designed by the most famous contemporary architect  – Rem Koolhaas. You will see a lot of young people taking photos of this building: they are probably architecture students who have travelled the world to see this library in real life! This building is designed with futuristic steel and glass facades, diagonal panelling and cubist features to demonstrate how the “church of knowledge” should embrace the future. Opened in 2004, the 11-story Seattle library became very quickly a national treasure and three years later even entered the AIA list of “150 favourite pieces of American Architecture”. This building proves that dusty bookshelves and gloomy interiors are no longer the prerequisites of libraries. Now it is the era of technology-driven information centres filled with natural light! Check the explanation of Rem Koolhaas regarding the inspiration behind his world-famous design below:

Another library example conceived by a prolific contemporary architect from Japan – Sou Fujimoto. It has one of the most minimalist interiors that a library can have  – it is made only from bookcases and glass façades. The building’s concept was to have bookshelves everywhere to magnify the cultural importance of books  – only reading areas interrupt this continuum of book shelves. According to the architect, this minimalism has a simple explanation: in the library you only need “books, light and beautiful places”.

Located near the waterside in the beautiful Danish capital, this library is one of the “Copenhagen cool” places where trendy people tend to go. Known among the locals as the Black Diamond, it is easily noticeable with its shiny marble facades and odd angles. The library’s harsh exterior is interrupted by a glass atrium. It becomes a particularly popular pilgrimage place during the summer when couples cosy up with a picnic by the water and students are sunbathing and doing their revision at the same time. Apart from being a library, this notable building comprises a Michelin-star restaurant, a café, a concert hall as well as the National Photography Museum.

The original library of Alexandria used to be one of the most celebrated and biggest libraries of the ancient world and dates back to the third century B.C. Unfortunately, it got destroyed because of Julius Caesar’s fire during the civil war in 48 BC with more than 700,000 texts getting burnt and which could never be recovered. The new library Bibliotheca Alexandrina was built in 2002 by the Norwegian architects Snohetta who got inspired by the openness of the original library. The concept of the new design was to turn the area into a global cultural hub and it got built using the efforts of multiple nations: Italy lent a hand with the preservation of manuscripts, Greece helped with antiquities and America assisted with technologies and computers. This library is more than a place where five million books are stored – it is a “centre for learning, tolerance, dialogue and understanding” with lots of art exhibitions and workshops hosted annually.

Built purposefully as the literary archive for the Library of the Yale University, the new Beinecke Rare Book & Manuscript Library is the largest building in the world dedicated to the preservation of rare documents and books. It is built out of Vermont marble, bronze, granite and glass to filter natural light to avoid damaging the rare documents. One of the main showpieces in the Beinecke’s library is the Gutenberg Bible.

Scholarships that Help You Pay for Textbooks

It’s not news that college tuition is extremely expensive. Yet, there is something else that will wreak havoc on your bank account: textbooks. Some of them cost a fortune (especially the ones for STEM courses), and even if you can rent some and share others with friends, there are books you will have to buy no matter what.

END_OF_DOCUMENT_TOKEN_TO_BE_REPLACED

A book cover undoubtedly makes the first impression. Just one look—and we are either urged to start reading a book right away or put it aside indifferently. The book cover speaks about the content; all its elements complement each other and are designed to match the book’s characters and story. They work together to produce the desired effect and communicate the author’s ideas in the best way possible.